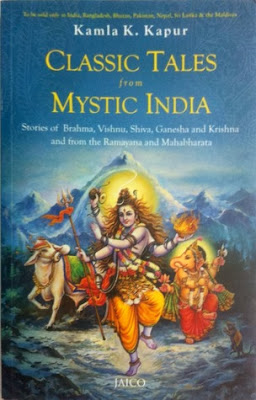 It has been quite some time since we have received this book for reviewing from Jaico Publishers.

Like all the other books from Jaico Publishers, this also was sent by Marina. Thank you, Marina.

To browse the various other books sent by Jaico Publishers, click here: BR with Jaico

Note: This was originally named 'Ganesha Goes to Lunch', which was later renamed as 'Classic Tales from Mystic India'.

Blurb (from the jacket):
King Kubera was the greediest man in the world. Hated and feared by many, he schemed to win the love of the beautiful goddess Parvati . . . but learned an important lesson when he invited her elephant-headed son Ganesha over for lunch one day . . .

Thus goes one of the many delightful tales in this decidedly grown-up book of traditional Indian stories, retold for the modern reader. Author Kamla Kapur is well known in her native India as a poet and playwright, and her connection to these age-old stories is the reverent yet individualistic one we might expect from someone whose introduction tells of her hometown, where naked, dreadlocked holy men speed about on motorbikes.

To collect these stories, Kapur relied on ancient sacred texts, modern scholarship, and chance encounters with interesting people who just happened to know a really good one about this time that Vishnu sank into the ocean, was incarnated as a pig, and had a really wonderful time.

Like myths around the world, these are teaching stories that offer both a window into a fascinating culture that has endured for thousands of years, and a code for living that can be applied to the modern world.

Our review:
I was always fascinated by the mythology, in general. Hindu mythology, in particular. As I am born Hindu. Nevertheless, I have very little knowledge about the other mythologies. In fact, I have very little knowledge about Hindu mythology. In India, where mythologies are less read, but narrated by one's grandmother, I lost her before I was old enough to understand things. So I never got that special privilege of spending time listening to my grandmother narrating the epic tales of Ramayana, Mahabharatha and other general tales of good 'ol times. So I turned to books, as I was already had a tang for novels. But I was confused on where to start. I was not sure, which author or the edition or the publications provided the authentic version of the tales. I started to search. And I keep searching even today. Not even today I am sure of the authentic version of the epics that in re-told as exactly, word by word. That is when I stumbled upon Arjuna by Anuja Chandramouli. Though I was certain that it was not the exact re-telling, I pretty much enjoyed it. The main story revolved around Arjuna, but it had bits of Mahabharatha involving Arjuna that made me feel like I know the basic skeleton of the epic. (I don't think anyone could know all the stories associated with Mahabharatha. It is humanly impossible.)

So when I learnt that this book was up for review, I accepted readily and finally, now, mustered time to read the book.

With its slender frame of just 160 pages, the book is pretty seducing. Not to mention, all those illustrations of Gods that occupied the whole pages every now and then. Pretty much, the book portrays the idea of a quick-read. I thought I would complete it in a go, which turned out very far from reality.

The tiny-font filled pages, with almost 40 lines a page, compensated for the slender frame and the full-page portraits in the book. To top that, a bit sophisticated language. In addition to the rare typographical mistakes. Well, perhaps, this is the first book from Jaico, which I had come across, which I had typographical mistakes. Or maybe, its my bad. Maybe I was too poor to understand its correctness. However, it took the double the time I had anticipated to complete reading this book.

Classic Tales from Mystic India. I wonder how the author named this book. Random tales from Mystic India, might have suited the book better. Of course, I am not blaming that the tales in the book are boring, which some of them are. But I am saying that they had little in common. It was like random picking from a yard full of different stones. No two stones were of same colour or shape or size. Like the title says, "Random" Stories of Brahma, Vishnu, Shiva, Ganesha and Krishna, and from the Ramayana and Mahabharatha. Somehow, I think the printer might have missed the first word, "Random".

Final verdict:
Though the book provided tales from mystic India, I fathomed nothing Classic about them. I am pretty disappointed even though the book had some good tales, for it misled me.

Tagline: Stories of Brahma, Vishnu, Shiva, Ganesha and Krishna and from the Ramayana and Mahabharatha