An Affair to Remember! by Harkeerat Anand 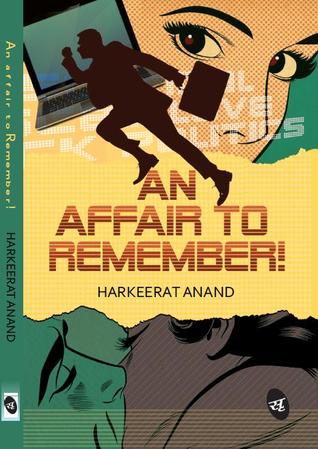 Filled with cheesy motivational posters, computer workstations crammed side by side, dumb bosses / blonde's and bored employees looking for a career change - ABCDEF Corp., a software giant, rankles with a sameness of a suffocating software giants existence. Until one man and his best friend take things into their hands.

What follows is a series of misadventures, flushing both men down a pink-caked urinal of self-destruction. Set in a city that once was, in an IT giant that once was, the two men journey through a cobweb of friendship, ambition, embezzlement, crime and most importantly, love. Will they survive ABCDEF Corp.? More so, will ABCDEF Corp. survive them?

Peppy, wild and bitterly sarcastic, An Affair to Remember! is a modern-day retelling of a decades-old classic.

My take on the book:
I have spent quite a long time reading this book, which is not a sign that signifies my disinterest in this book, but my preoccupation in working on my own novel and in other stuff. Most of my time these days are occupied with writing, so the blog has gone almost entirely inactive. Well, I hope this review on it will gain back the same vigour like before!

Having read the blurb, it is certain that this is yet another of those cheesy stories. Coming to read many serious stories, I was pretty much looking forward to it - which is not my usual self. I would prefer serious novels to cheesy romances anytime. But I was up to some change.

The authors pace of narration was pretty good. Her words had a thing to tickle anyone. The use of the vocabulary was so simple and effective, it is the best form of narration if you ask me. Also, the comical narrative of the scene is the best aspect of this book. It makes this story a light-hearted, fun read.

But then, the dialogues pretty much disappointed me. In an attempt to re-create originality the dialogues were written so plainly that it bored me to sleep.

Having said that, I still ponder on what more is there to talk about the book and I realise there isn't much. That's it. That's all there is to mention, not revealing much about the story, to the book.

Overall, it is an average read and readers who tend to enjoy light, masala-filled reads will enjoy this book...

Title: An Affair to Remember!