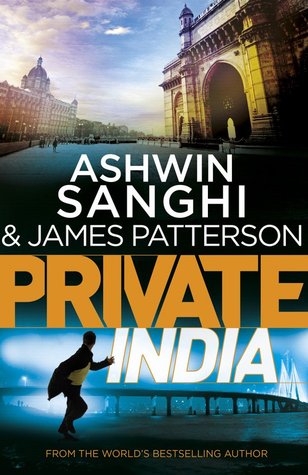 In Mumbai seemingly unconnected people are dying, strangled in a chilling ritual and with strange objects carefully arranged with the corpses.

For Santosh Wagh, head of Private India, the Mumbai branch of the world’s finest investigation agency, it's a race against time to stop the killer striking again.

In a city of over thirteen million, he'd have his work cut out at the best of times but this case has him battling Mumbai's biggest ganglord and a godman who isn't all he seems.

And then he discovers there may be an even greater danger facing Private India. Hidden in the shadows is someone who could destroy the whole organisation along with thousands of innocent Mumbai citizens...


My take on the book:
Firstly, I don't understand why James Patterson is on a spree to collaborate with different authors throughout the world to write his book. If he needs the details of the place, he might either visit the place himself or do some research online, but why work jointly. Since writing is a work of mine, it must be a helluva task to write together. There will be difference in opinions, what comes across as best for one can't hold the same impression on the other, no two minds think alike. Ultimately, why.

I will never be able to fathom.

I have read works of Ashwin Sanghi, all of them. And immensely love his work and his well-researched novels, but then I am immensely disappointed when people started to call him Dan Brown of India. He had made his own name in the Indian Thriller industry and then people are naming him after someone else, from somewhere else. He is too good to be title him with other authors.

I am as fresh to James Patterson's work as a newborn. It really scares me when I came across the three-page list of his novels. No doubt, I hadn't read him. For some strange reason, I don't like reading overly-published authors.

PRIVATE is a PI Agency which had its offices spanning the world. It has it's Indian branch, Private India, with Santosh Wagh as its head. Though I didn't know why collaborate, but I entirely made out whose idea was what. While the basic outline of the plot and pace came from James Patterson, the twining of Hindu mythology in the murders of the serial killer indeed does come from Sanghi. Yeah, there is a serial killer. Am I to alarm the spoiler alert? Well, I guess that will only enhance urge to read the book.

When on one hand, I really love the blend of genres that is the story, I didn't much like them tying up. Mumbai was literally portrayed as 'devil may care for others' kinda city. And the parts like DNA tests from hair samples seemed like far too simple than they really are, which really disappointed me. The problem was that due to the ultimate duo, I was something more and the book turned out to be just like any other suspense thriller.

If you decide to give this book a try and pick up, you would complete it no time, I assure you. The small chapter - each chapter spanned 4 pages on an average - with double-spacing and large font makes it a breezy read.

Overall, it was a mediocre read, not up to my expectation, but good for killing time...

This review is a part of the biggest Book Review Program for Indian Bloggers.
Participate now to get free books!