Vengeance Of The Warrior by Shobha Nihalani (NINE Trilogy #2) 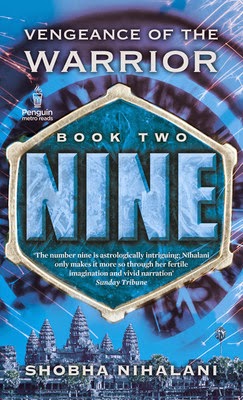 AUTHOR: Shobha Nihalani is the author of Nine:Curse of the kalingan warrior,the first book in the NINE trilogy,and The Silent Monument. Her debut novel,Karmic Blues ,was translated and published in Denmark. She lives in Hong Kong with her family.

ESSENCE OF THE BOOK: This book being the second book in the NINE trilogy contains new characters which weren't mentioned in the first one. In the first book the kalingan warrior's  spirit is imprisoned in the temple of Angkor.
And now  the spirit is back with double the vengeance, arrogance, anger and thirst to kill the three members of the secret council of nine- Tara, Aksh ,Zubin and finally destroy the Mauryan era.
And this time it is not the spirit but Tejaswi who pestered a witch to invoke an evil spirit in her with the help of her black magic for her personal reasons. The kalingan spirit which is thirsty immediately turns up into tejaswi. A combination of Yan and Yang. Feminine body with a masculine consciousness, warrior's spirit in Tejaswis's body is back to battle against the secret council of Nine.It's few times more stronger, angry and arrogant.
This time it is a tough battle for all the three young members of the council to battle against the spirit . They seek the help of the six senior members synchronizing their energies ,honing their physical abilities to tackle the kalingan's spirit
Raakin and Anitha are the protectors of the three members of the nine this time, they work hard ,sparing their lives to protect them.
What happens when  Tejeswi along with the kali yogis encounters the young members Tara,akash,Zubin and their protectors Raakin and Anitha at  Dhauli in Orissa ( which is the battle field of the kalingan empire ,The place where the terrible war took place in 261 BC between Mauryans and kalingans ) is best savored by reading the book.

NOTE : The author has very well depicted the second book too ,festooned with a few facts like
The twenty -three -foot -high Ashoka Pillar in Delhi ,weighing over six tonnes ,built during Gupta era ,is an enigma. Modern metallurgists are still pondering over the quality of the pillar which has shown no signs of corrosion for thousands of years.

It's an amalgamation of facts and fiction ,together formulating into an objective ,crisp plot. The narrative style is perceptive, captivating and energetic.

Review in association with The Bookaholics