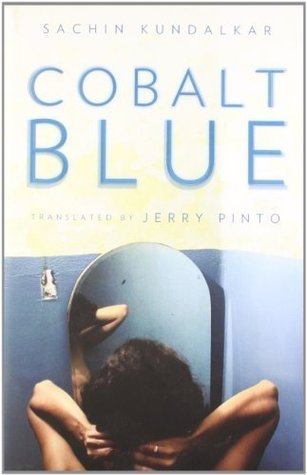 A paying guest seems like a win-win proposition to the Joshi family. He s ready with the rent, he s willing to lend a hand when he can and he s happy to listen to Mrs Joshi on the imminent collapse of our culture.

But he s also a man of mystery. He has no last name. He has no family, no friends, no history and no plans for the future.

The siblings Tanay and Anuja are smitten by him. He overturns their lives. And when he vanishes, he breaks their hearts.

Elegantly wrought and exquisitely spare, Cobalt Blue is a tale of rapturous love and fierce heartbreak told with tenderness and unsparing clarity.


My take on the book:
This is one of those rare off TBR (to be reviewed) reads I have been choosing these days. Though I had this book in my lot for quite some time, I finally decided to read on the recommendation of one of my friends on GoodReads. Like usual, I started to read the book on impulse, without reading the blurb.

And also the fact that the edition I own is hardcover, made me want to read it more.

I hadn't paid the cover much attention until I got through quarter of the book. I was of the thought that it is some guy with an afro checking himself out. No! On closer examination you could notice the sagging breast of a woman in the reflection. That day on, I removed the dust cover of the book whenever I took it alone, anywhere I went. I was aware of the weird glances I would receive from the others. But soon, as I read the book, I started to feel less awkward.

It is a gay story. An absolute mislead! It is part gay story, but nothing homo about it. It deals with higher things like feelings, emotions and introspective thoughts.

As I started off reading the book without a hint of what the story is about, I was pretty devastated when I learnt that it is a story, a monologue, of a gay! Call me hypocrite or whatever, I don't encourage the very concept of homosexuality. Neither do I protest against them. It is their will and wish, so it doesn't bother me. However, my opinion doesn't matter in the society. So...

But then, like most thought-provoking books, as I read this book, my perception about gays, in fact everything changed. Having known their feeling, which is no different from my own feelings but only in the aspect of gender, I realised how foolish it was of me to despise it. As I ponder over it further, I found nothing hateful about it. For a book to change someone's perspective, it doesn't need but a good voice. This book has it. The book is as simple as it is intense, has some interesting characters and leaves an impression which makes you think about it for a long time after reading the book.

And then the second part of the book began, which is the monologue of the earlier protagonist's sister, who happens to love the same person as her brother. Though tragically comedy, it is pretty serious if you read the book. It is not as half as funny as it sounds. There is a lot of anguish and pain and devastated hopes and much more serious stuff to it.

With all the mentions of my serious stuff, don't presume that the book is too serious for you. It has it's own hilarity to it. "It is called dark humour," my friend told me. Whatever that is, it was thrown into the book in appropriate proportions making sure not to make too much fun of the character's emotions.

Overall, it was a fine and refreshing read. A great rejuvenating for my depleting interest in reading.

And yeah, I stopped hesitating sporting the book with the dust-cover to wherever I went...