Twice Upon A Time by Anjali Bhatia 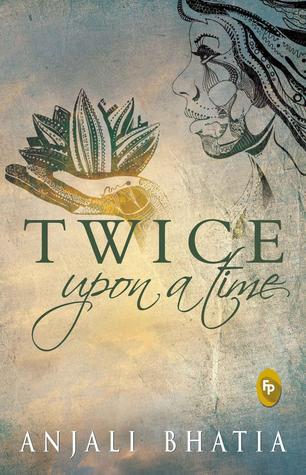 Is a man’s past set in stone, or can it be changed? Rewritten and reshaped?

Is time a reality, or a construct of the imagination? Fleeting and fragmented?

One man is about to find out...

Meet Arpit, a bitter young man who embarks upon an incredible and seemingly impossible journey to right the seven wrongs that have shadowed his life, all in a quest to be together with Mannat, the love of his life.

When Arpit meets Nishimaya, a modern-day mystic, little does he know that his life is about to change. In entirety. But change comes with effort. And Arpit has to lose himself in order to resurrect his past and set things right. With every past mistake he corrects, he finds a corresponding change in his present life . . . but not all changes are easy to make. And as Arpit travels further back into his own life, he’s forced to dig into frightening depths and fight against his own self to dredge up the truth from the sediments of folly that litter his world.

Unknown to him, however, Mannat is supporting his struggle from halfway across the world even as she tries to gather her own life together. And Nishimaya, as she takes Arpit through the swirls of time, has to confront ghosts of her own as well.

As their lives get caught in the web of karma, dreams, memories, and destinies, Arpit, Mannat, and Nishi must stumble and fall if they are to reach the end. But Time still holds a revelation none of them had expected...

My take on the book:
Being Sci-Fi fan, I always feel jealousy towards Fantasy writers. Mind you, it is just jealousy and not hatred. While Sci-Fi authors have to do extensive research, break down complex stuffs for lay-readers, Fantasy writers could burn out the Sun and they need not explain. How lucky! This book has a deal about Time-Travelling. Time-Travelling according to Sci-Fi is a very complex procedure and cannot be achieved without proper scientific explanation, but than in books like this one, you could visit and undo some of your follies in your past by just dreaming. All they, the Fantasy writers, need to do is add to magical person to the plot - just like in this book.

That explains the basic plot of the book!

The above paragraph must've delivered some negative impression, actually the book was not as half as bad. It was good. I felt the feeling which I felt when I read Jeffery Archer - I am not much of his fan or read much of his work. Each key character in the story is lucky to have their own story included in the main story. So it was maturer of a debutante to venture so.

I really appreciate the author for such a brilliant title that is apt with the story. Even the cover-design is pretty eye-catching.

Overall, it is a fine, light read. And nothing more.

Title: Twice Upon A Time