A Country for Men by RKSJ 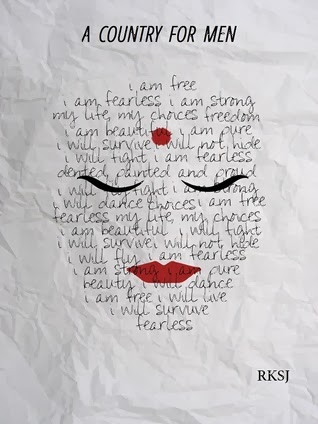 Out of our usual stackers, I have received a mail from BlackBuck Publishers. Heard of them before? Neither did I, until then.

They were new into the publishing industry. Their first book was, Life's Like That by Prashant V. Shrivastava, which clearly bore the signs of immaturity. It was poorly edited and was boring in more instances than one.

The mail from them contained with the request to review their books the details of four books. Each book's cover design was uniquely assembled and I was right away tempted to accept the offer.

So they sent four of their books over. The other three of the books are,


The reviews of these books are yet to follow...


An ugly and terrifying truth about the women of India.

A girl born in India is considered to be a liability right from her birth, she has to suffer at different stages of her life from the very people who were supposed to love her, cherish her.

The increasing number of rapes and other dreadful incidents has made things worse for them; now they aren't safe even inside their homes.

The whole system has failed the women of India comprehensively; this book is a historical, geographical and social view of the hate culture that the women are forced upon in this country ever since.

Our take on the book:
Ever since I had read the first lines of few books like Lolita, I started to direct a great deal of interest towards the starting lines of a novel. Some novels have a pretty awesome lines, like in Fahrenheit 451,

It was a pleasure to burn.

But most of the Indian authors paid little heed to the starting lines. Many of Indian books started as casual as they could get. No heavy lines to start with. And then I read this one. The very first lines, or rather the whole of first paragraph developed a very keen interest in me.

"The first sentence of a book is a handshake, perhaps an embrace. Style and personality are irrelevant. They can be formal or casual. They can be tall or short or fat or thin. They can obey the rules or break them. But they need to contain a charge. A live current, which shocks and illuminates."

The first lines of this book were about Rape. The very word, Rape. Let me take the liberty of quoting the entire paragraph here,

To start with a definition of Rape would have
been utterly cliched and obvious. Almost everyone
who has heard the word Rape knows the meaning
of it. The sheer awareness of the word speak
volumes. It has becomes an equally common
phenomenon as the weather. Still to give you a
definition, you might think I'm trying to fill this
book up with unnecessary information.

Can anything beat that? For this very reason, hats off to you, Rohit. The sheer frankness of the paragraph qualifies it to one of the best starting lines in my list. It also built very huge expectation about the book. Well, mind you, I read this book even before I read the blurb. In fact, I didn't even know that this book was work of non-fiction.

As the book progressed, I felt pretty much drawn to it. The statistics mentioned in the book sent me into a state of infinite introspection.

The cover design, after reading the book, held a very great aptness to the content of the book. In fact, it is due to the cover design that I chose to read this book first over the other three books.

And also, its size. The book is small in both the dimensions. Length and width. There were only 150 pages, with pretty big font size and neatly double-spaced.

That's about the positives. Now about the negatives.

Best part of the book was either quotations from the various new articles or inputs from various statistical studies from all over the web. Though the fire in the author was pretty evident, too many numbers and quotes, the lesser participation of author's experiences, etc had been a very huge downers. During the latter half of the course, it felt as if I was reading a field report than a book.

Overall, the content of the book is pretty strong, but I don't understand why would someone spend bucks on a book that is just a collections of articles based on difficulties faced by Indian women. The sole purpose of the book, as it seemed to me, was to create awareness and make India a better place to live in. But still the same question pesters me. Why would someone spend money to read a book of awareness? Perhaps, this book is better for NGOs to spread among the lady-public for free.

I would have given a whole 4-stars for the author's effort, but when it comes to its performance in the market, I couldn't rate it so much.

Title: A Country for Men