The Edge of Power by Tuhin A. Sinha 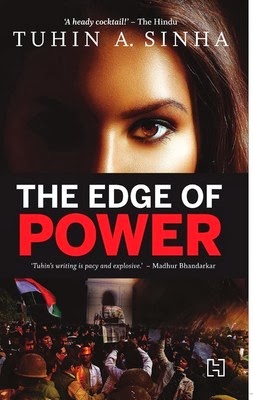 I didn't read many books from this author. I read his other book, perhaps the prequel of the book in discussion, The Edge of Desire and right away noticed something ablaze in him.

By the very choice of the plot for his stories, we can tell that he is not just any other author, struggling to write a college romance. There is always a message, a sensitivity, a potpourri of emotions in his books.

Like I have said, even this book had got some very sensitive topics, like Delhi Rape incident, Indian politics, etc. If you ask me, they are pretty tricky topics.

Even if I try, I wouldn't be able to write a story based on Indian politics. It is a deep mess I can't get myself sorted off, once if I try and get in.

If I don't stop here, I would keep on ranting about the various off-topics. So I would end the foreword and move on to write the review of the book.

Blurb (from the jacket):
The heinous gang-rape of Nirbhaya has jolted the Indian nation out of its apathy but rape and violence against women are only symptomatic of a deeper malaise that ails the nation: the total collapse of governance under the weak and vacillating PM, Devender Singh. Ironically, aiding the PM and his Indian Democratic Party(IDP)’s cling to power is a casual and largely indifferent Opposition led by the venal Ravi Nehra. A ray of hope finally emerges when ex-journalist and RTI activist Daivik Verma and the gorgeous Catherine Khan, a leading Bollywood film-star with a mysterious lineage, decide to challenge the existing system by floating a new political party but lack of funds and cadre-support thwarts their efforts: their only recourse being Shruti Ranjan, who had sworn off politics three years ago.

Will Nirbhaya’s gruesome rape and her subsequent death bring a disillusioned Shruti Ranjan back into the political fray, dominated by crime lords and bankrolled by industrial barons? Will the trio manage to stage a coup and dethrone India’s worst regime? Will the land of great leaders like Chandragupta Maurya, Ashoka and Akbar, finally get a dynamic Prime Minister she so badly needs?

A racy political thriller, The Edge of Power is a powerful enquiry into the underbelly of Indian politics. It raises important questions over the funding of Indian political parties, while presenting Shruti Ranjan, the immensely popular protagonist of The Edge of Desire, in a refreshingly new, resurgent avatar.

The very moment I read the first page of the story, I was hooked. It had a article mentioning about the Nirbhaya rape case - more famously known as Delhi Rape incident. It didn't fascinate me, but it stirred me that same feeling which I had when that incident hit the media. The very details of the incident moved me to tears. Thankfully, there were no details in this book, just an outlining article. I couldn't deal with a tearful session recollecting all those details, while I was travelling in a bus.

It was wonderful to see how knackfully the author challenges the government with various questions of justice. His effort must be further appreciated for fictionalizing various real-life political figures, whom I won't try and mention it. Also the link drawn between the two books - EOD and EOP - is very subtle. In addition to that, the author plunges and brings out a raw, crude story from inside the Indian politics.

Overall, the story was pretty interesting and fast-paced. The author, Tuhin A. Sinha, proves once again to stand out as one of the most sensible authors of today's India...

Title: The Edge of Power

Reviewed for: Tuhin A. Sinha