The Mountain of Light by Indu Sundaresan 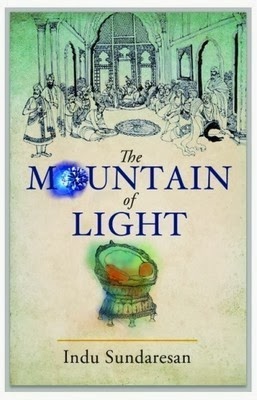 It was during the release of this book, it hadn't yet hit the market. There was a huge campaign of marketing going on about this book. Almost every book-reviewing site I knew was marketing/advertising about this book.

In fact, the author was hailed like some very well known author, when it was the first time I had heard of this author. I didn't even hear of her most acclaimed work, The Taj Trilogy - consisting of The Twentieth Wife, The Feast of Roses, Shadow Princess.

Having very high expectations, I liked the author's FaceBook page.

After the book hit the market, I saw a post by the author, herself, announcing a huge giveaway to readers in exchange to a book-review. Well, I dropped in my e-mail ID.

The following day, I was contacted for the shipping details, which I provided. A month or two passed since then. I even forgot that a book like this even got published. All of a sudden, there was a courier at my doorstep. I was wondering who sent the book, as I had stopped accepting books for reviewing during that time.

To my surprise, it was this book. Then I left the book as it is for a very long time, until day before yesterday...

Blurb (from the jacket):
As empires rose and fell and mighty kings jostled for power, its glittering radiance never dimmed. It is the "Mountain of Light" - the Kohinoor diamond - and its facets reflect a sweeping story of love, adventure, conquest and betrayal.

Legend has it that Lord Krishna gave the Kohinoor to a devotee as a reward for his meditations. But the first recorded mention of the diamond is in the memoirs of Emperor Babur, who received it from a Hindu raja he had defeated. It then slipped out of India and was possessed briefly by the Shah of Persia – who gave it its name – and the king of Afghanistan, Shah Shuja, who surrendered the Kohinoor to Maharaja Ranjit Singh of the Punjab Empire as a reward for helping him regain his kingdom. Here begins The Mountain of Light.

The novel takes us through the sprawling gardens of nineteenth century Lahore to the palaces of the six-year-old prince Dalip Singh who, on his father’s death, loses his empire and the Kohinoor to the British. The diamond is secreted out of India once more and, at the age of sixteen, the boy king follows it to London, where he is feted and petted until he realizes that nothing can replace the loss of his lands and his diamond – which now belong to the Queen of England.

Wonderous and rich in its historical detail, Indu Sundaresan's much awaited new novel is as dazzling as the diamond itself.

My take on the book:
The very title of the book intrigued me. It has some kinda ascetic aura about it. The Mountain of Light. Light depicting some kinda enlightenment thing, nirvana.

As usual I started reading this book without glimpsing at the blurb, which was a grave mistake.

10 pages down, I was bored like hell that I had to read the blurb, but when I did, the plot seemed pretty exciting. I read the book further. It was getting harder each moment to keep myself awake.

In simple words, the story is a probably fiction. The story based on facts, but elaborated in a probable way. So it is a fiction based on the facts. The story is about the last years of Kohinoor in India, before it was packed off to England and then to English Queen's possessions.

I had tried extensively to read the book for three whole days, at various points of times, because every time I try to read it, I doze off. I couldn't get past the 76th page.

Giving up reading, I started to ponder on the reasons behind why I was disappointed by a book which had so wonderful a plot,
Overall, in spite of the a great selection of plot, the narration of the author and the public display of her knowledge had made this book a very disappointing read.

Title: The Mountain of Light