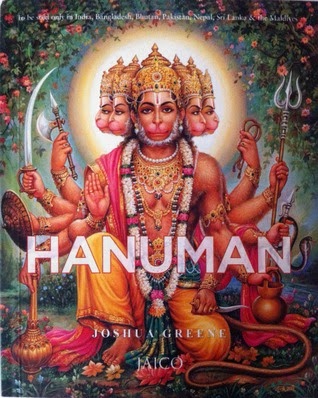 I pretty know Hanuman's story from the animation movie, Hanuman, which I had seen when I was small. It is really interesting to read that movie in textual forms. Also, this book had some other things which were not briefed in the anime.

The timeless story of Hanuman, the monkeygod, is that of a valiant superhero best known for battling the demon Ravana in the classic tale Ramayana, but there is much more to know about Hinduism's bravest, most endearing figure. As a youth, Hanuman's pranks often led him into trouble with the village elders. Eventually they cast a spell, causing him to forget his immense powers. In a cursed state of ignorance, young Hanuman believed himself to be just an ordinary monkey. He realized his potential as a warrior only later, while rescuing Sita, the kidnapped wife of Rama, from the clutches of Ravana.

Although Hanuman developed mesmerizing mystic abilities as he matured, it is his sensitivity and devotion to King Rama that make him such a memorable character.

A very beautifully written books about the life of Hanuman, which is made more beautifully with all those colourful illustrations...