Blue Is the Warmest Color by Julie Maroh 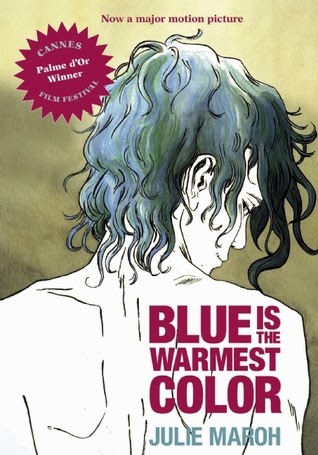 If I had to thank someone for making me read this book, that would be Srinivas, the other author of the blog. Who was the person that injected the words Graphic Novel into my reads and also for asking me to read this one.

The other Graphic Novels, I had read,
To compare the three Graphic Novels, every aspect of them differ widely. While I admire Asterios Polyp for the illustrations, I love Persepolis for its witty narration and this one for its story.

Like I mentioned in other novels too, it is a very unique experience to read a Graphic Novel. It is like you are watching a movie with subtitles and on mute.

Definitely a experience every reader must try...

Originally published in French as Le bleu est une couleur chaude, Blue is the Warmest Color is a graphic novel about growing up, falling in love, and coming out. Clementine is a junior in high school who seems average enough: she has friends, family, and the romantic attention of the boys in her school. When her openly gay best friend takes her out on the town, she wanders into a lesbian bar where she encounters Emma: a punkish, confident girl with blue hair. Their attraction is instant and electric, and Clementine find herself in a relationship that will test her friends, parents, and her own ideas about herself and her identity.

First published in French by Belgium's Glénat, the book has won several awards, including the Audience Prize at the Angoulême International Comics Festival, Europe's largest. The film Blue Is the Warmest Color won the Palme d'Or at the 2013 Cannes Film Festival.

Julie Maroh is an author and illustrator originally from northern France.

Our take on the book:
What a cover design. And also the title. Can a title of the book get any poetical? Blue is the warmest color. So contradicting, yet poetic. Well, the title has a great deal of significance in the story. Read the novel to find it out.

Winner of Palme d'Or at Cannes festival. Fascinating, I must say. Well, I had seen the movie, too. Just after reading the book. My mind was blown. Seriously, no p0rn, also no lesbian p0rn, was so intimate and amorous. I still can't fathom how someone can film so extravagantly.

Back to the novel. I pretty much liked the story. It was romantic. Way too romantic. But then, I changed one of the girl and replaced her with a boy. And imagined the story. Damn, I thought. It is just another love story. That was it. It was just another romance. Perhaps, a Mills & Boons story. A typical one. Nothing fascinating or brilliant about it.

Also the dialogues, which seemed very intimating and romantic with the story, sounded pretty usual in the girl-boy version I have imagined.

It was clearly evident that the book is admirable only for it is a Lesbian story. There is nothing more to it.

But then, the part in which Clementine's emotions are delivered comes. Clementine is the undeclared protagonist of the story, who has been living her life ordinarily, until she comes to meet Emma. Clem feels so pulled by her that she goes gaga over the unusual behavior of mind and body, and also her soul. Her initial struggle to come to terms with her new-found allure for another person of same gender was exquisitely portrayed.

Overall, it was fine read. In spite of not being a Lesbian, I pretty much enjoyed it (no pun intended).

Title: Blue is the Warmest Color