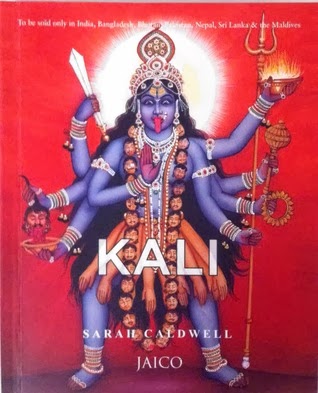 This is a part of Jaico publishers, Mini God Series, which also contains...
I want to start by thanking Shrey Mehta for sending such awesome the very moment I requested to review them.

Why chose this book?
Well, it is simple. It is due to my love for mythology that I chose these books. And especially this one, because, there are various tales making rounds about the other Gods, but about Kali ma, there are fewer tales. As per me, I knew not even one tale of her power, so I chose this book.


This attractive addition to Mandala's bestselling mini-book series explores Hinduism's most enigmatic figure in all of her glory. A wide range of vivid illustrations, both traditional and contemporary, showcases the paradoxical and often shocking imagery of Kali, whose outrageous appearance and behavior shatter all social conventions.

These intense tales recount Kali's origins as the shadow self of Durga, a goddess who appears in the world in order to save the terrified gods from the demons Sumbha and Nisumbha. Brandishing weapons of destruction and cackling madly, she annihilates an ever increasing number of miscreants who try her patience. She comes not only to restore balance within the universe, but also to help humanity cut through the bonds of illusion and attachment.

The second best aspect is the size of the book. It is small in both the magnitudes - length and width. It is just 96 pages thick. In fact, all the books of Mini God Series are 96-pages think.

Whenever I come across an portrait of Kali, all my mind is filled with is ferocity. Yeah, that word best describes her. Well, the story I just read in this book second that appearance of her. I know the reasons now. Well, not reasons actually, but more kinda little secrets.

I now, after reading this book, admire the sheer appearance and greatness of Kali, who is worshiped equally by both good and evil.