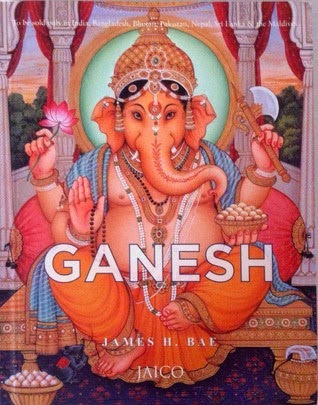 There were not many tales of Ganesh that I have heard. I knew only one: the story of how he was born and got his elephant-head.

Blurb (from the jacket):
In India, statues of Ganesh are placed at the inner-gates of many temples, symbolizing his role as a keeper of sacred spaces. Here, pilgrims and passers-by, pay homage and seek his blessings. It is this symbolic presence at the entrance of our most holy places that makes Ganesh such a vital figure in our lives.

Stationed at the threshold of sacredness and awareness, mediating between the possibility of the profound and our often habitual, mundane perception of the world, Ganesh is the guiding force behind this very moment of experience where desire meets possibility. Ganesh removing the Obstacles offers practical and meaningful interpretations of folk narratives and sacred texts concerning the larger-than-life elephant-headed god, Ganesh.

My take on the book:
On every Ganesh Chaturthi, my mom instructed me not a look at the moon. If anyone did that on that particular day, they are believed to be sinned. Neither did she explain me the reason behind that belief.

But now, after reading this book, I know why. In fact, I have got answers for various other why through this Mini God Series.