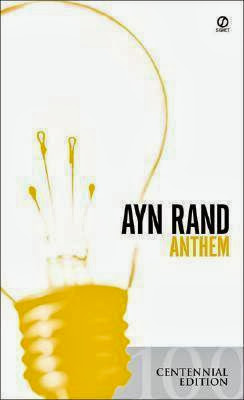 This is one of those books which we haven't received for reviewing. Of course, we are just too small-time, to receive an Ayn Rand's book for reviewing. In fact, I don't see any need why her books would need ratings, reviews or publicity. People who are familiar with Ayn Rand's writing will read them anyway and others will read them, too, for the mere brilliance of her work!

Basically, this is my first exposure to Ayn Rand's work, her philosophy, objectivism, her followership. Never in my wildest dream did I think that Ayn Rand was such massive figure in the field of literature and philosophy. In fact, it was a shocker to know the various organizations named after her and built on the basic foundation of her philosophy - objectivism.

The very basic reason I picked up this book is by its slender thickness. It is seldom 105 pages, which includes 16 pages of 'Introduction'. Perhaps, I believe, this book is the thinnest book written by Ayn Rand. Well, I was being satiric, about her other humongous books - Fountainhead and Atlas Shrugged.

The other reason behind picking up this book is its Dystopian plot. Every since I read, Fahrenheit 451, I developed this strange tang to read more of Dystopian novels. In fact, there were many similarities that are clearly shared between these two novels, apart from their slenderness.

Well, when I Dystopian, I am not talking about books like Hunger Games or Divergent trilogy. Of course, they are Dystopian, but nowhere close to what the likes of this book have to offer. These are serious stuff.

After reading this book and getting to know about things about Rand, I am looking forward to read her best word: Atlas Shrugged, the following year...

Blurb (off the jacket):
He lived in the dark ages of the future. In a loveless world, he dared to fall in love. In an age that had lost all trace of science and civilization, he had the courage to seek and find knowledge. But these were not the crimes for which he would be hunted. He was marked for death because he had committed the unpardonable sin: standing out from the mindless human herd. Ayn Rand’s classic tale of a dystopian future of the great "We"—a world that deprives individuals of a name or independence—anticipates her later masterpieces, The Fountainhead and Atlas Shrugged.

Our review:
The very first time I read Fahrenheit 451, I have made up my mind to read all the books of the like plots - Dystopian by nature. That is when Srinivas, the other author of this blog, recommended me this book. In fact, he also bought me this book. Right then, I knew it was a precious book, because his action was pretty generous.

Firstly, I must seriously give it a thought about how authors, not all, only those with such great stories to tell, come up with so interesting plots. Seriously, why can't I come up with such plots? Wait. Maybe I am not trying enough. That's what's happening to me ever since I read these books. This acute obsession of writing one such epic story had taken toll. Maybe, I will. Or maybe not. But these books are definitely are going to have a special place in my shelf.

About the edition:
I must particularly dedicate a part of the review to give the details of this edition, that I have read. While the actual book is enclosed in the first 105 pages - including the introduction - this edition is spread for 253 pages. Post the end of the story, this book contains the Fascsimile Edition of the original British version of the book, with the correction made by Ayn Rand, with her own handwriting. A real collectors' stuff! 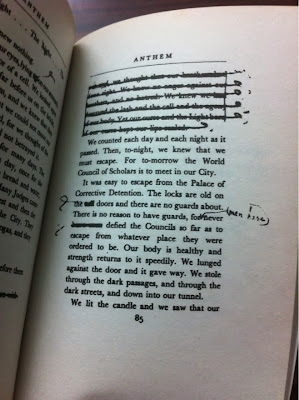 My review so far seems like the book has impressed me no end, then why don't I give it a five-stars, you ask me? Well, though everything about the concept of the book is my-kind, the story is very short. I have been through the book in a breeze. You would be at the end of the book even before you realise that you have started reading it. That was one aspect that disappointed me. Other than that I pretty much liked the book.

And, now, after reading the entire book, I understand the real significance behind the cover picture - the picture of a light-bulb. If you want to know, too, go order the book in one of the affiliate links given below.