The Shadow Throne by Aroon Raman 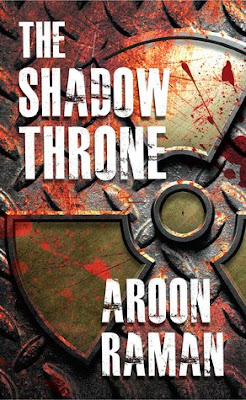 It was well before now, when this book had just got published, when this blog was nonexistent, when I was pretty new to reading and I was roving around asking people for recommendations but only Indian. I had this special tang for Indian authors back then. Even now, for that matter. The stories they narrate could be related to and the feeling own-ness will never leave while reading.

That is when Vinit K. Bansal (author of I'm Heartless) recommended me two books - The Cavansite Conspiracy and The Shadow Throne (this one). Both were thrillers and by Indian authors. I got my hands on the former one and read it. I pretty much liked it. Though, I consider it an average book to the present standard. It was  pretty intriguing for a noob like me back then.

But then, I never got a chance to get this book. Though I have been coming across this book more than once, on various online-selling portals in their page of "Best Sellers", I didn't quite paid much heed. Until the author himself has contacted me recently.

A mysterious murder at the Qutub Minar triggers a call to ace journalist Chandrasekhar from his cop acquaintance, Inspector Syed Ali Hassan. The victim is unlike anyone Chandra has ever seen: a white Caucasian male who has all the looks of a throwback to Greek antiquity. Soon after, Hassan calls in to report the case has been taken away from him – in all likelihood by RAW – the Research & Analysis Wing, the uber-agency of Indian intelligence.

What began as a murder enquiry soon morphs into a deadly game of hide-and-seek within the shadowy world of Pakistan’s ISI and India’s RAW; and Chandra, his friend history professor Meenakshi Pirzada and Hassan find themselves in a race against time to avert a sub-continental nuclear holocaust.

As the action moves to its hair-raising climax among the Hindu Kush Mountains of Afghanistan, Chandra must face up to the fact that Inspector Hassan is not all that he seems …

The Shadow Throne displays taut writing and nail-biting suspense in a debut that is chillingly believable. Will this unlikely trio succeed in navigating the treacherous politics of India and Pakistan?

About the author (from the book):
Aroon Raman runs a research and innovative companyout of Bangaluru, working in the area of materials science. He divides his apre time between trekking, advising and supporting NGOs, and travel. The Shadow Throne is his first novel. His second, an adventure story set in Mughal India, will soon be released by Pan Macmillan. Contact him on www.aroonraman.com .

Our review:
Firstly, I would like to thank the author for the author-signed copy, 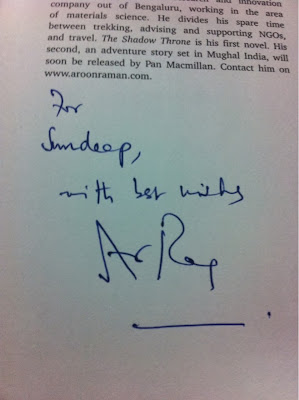 which is a great act of kindness, considering our delight for author-signed copies ... and also the exclusive bookmark!! 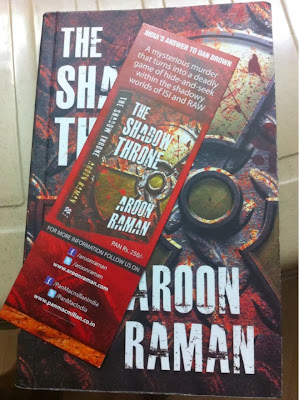 Everything about the book is fascinating to me. Right from the size of the book, which is more like a handbook, to the thickness, to the cover design - everything gets a perfect-ten from me. Though the cover design might seem a bit dull on the online-portals, it way too intriguing in flesh and blood. The physical aspects are very satisfying and a all-five stars!

I feel ecstatic when almost all the facets of the book are in favour of my taste. By all facet of the book I mean, the author's signature, exclusive bookmark, the perfect cover design, great plot and a intriguing narration. It once happened earlier in the case of The Virgins and the feeling has repeated itself now.

To best describe the author and his narration, I would like to re-write those golden words printed on the exclusive bookmark - INDIA'S ANSWER TO DAN BROWN. Yeah, Aroon Raman could be called the 'Indian Dan Brown'. Such was the intensity of the impact his style of narration had on me. The very opening of this story reveals a death - and it is not the death of a general person, mind you.

The story sets you thrilled from the very start of the story. Apart from the brilliantly described scenes, the book is very informative. That is another aspect I loved about the book.

When I first saw the huge paragraphs and thickness of the book, I thought I might have to spend several days to complete it. But to my own surprise, I completed the entire book in only two sittings! If it had been a avid-reader, he would have completed the book in a one-go, I guess.

For one last time, again, I like to thank the author for giving me a chance to read such a wonderful book, without whom I would have easily missed so wonderful a book...

Final verdict:
Overall, the best thriller I have read so far from an Indian author. Deserves a read!