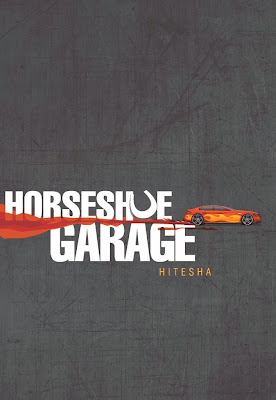 Lately, Leadstart Publishers have been in a full-swing. The market is like flooded with a ton of their books. Especially from their self-publishing imprint, Frog Books.

However, this book is printed under the imprint, Jufic Books, which primarily concentrates on Thrillers and Urban Fictions. To know more about Leadstart Publishers, click here...

The present book in discussion is one of the four book sent by Parag Mayekar. The other three are:
After reading all the four books and weighing them, I think Arjuna is the best, so far.


Though he has gotten used to his salary and his job at Grant Motors, Sarvesh still finds himself waking up in the middle of the night, his heart pounding with the excitement of a Neo-Racing dream. The technologically advanced cars and the smell of the burnt rubber of the tyres haunt him all the time.

When Neo-racing creates space for a team from India, Sarvesh is determined to be a part of it. Tagging along as a non-description member of another giant team is not going to suffice. Along with his best friend Rags, he is determined to lead his own team on to Neo-racing race circuits.

Naaz is an orphan who has been raised in a garage and has never studied beyond the fourth grade. She has taught herself all that she knows about cars by working alongside sweaty mechanics. This knowledge allows her to deduce in three seconds that the car design created by Sarvesh and Rags will not qualify for New-Racing.

Friendship is tested, loyalties are questioned and spirits are broken in this challenging race to achieve an impossible dream.

Our review:
It came as a stunner when I learnt that the author has already published two - one paperback and another ebook - books. Well, that explains how she came to write so heavy a book! Adding to the actual weight is the great quality of paper. Overall, the book spells literally 'QUALITY', from the very look.

One of the best cover-designs of these days. The very plain, textural cover design, with classic racing car is just too tempting to pick-up. Like I have already said, it is great combination of pleasantness and quality! However, my mind wonders why the author's surname wasn't depicted on the cover.

Now that the anatomy of the book is described in one word, let me describe the story in one word - "Elongated".

Firstly, it is quite a stunt for a girl to write a story on racing and cars. I am not trying to be chauvinist, but don't women despise racing and stuff. Of course, they are wooed by the posh cars, but writing in such detail about racing and putting together of a car is a much applauded trait of the author. But that doesn't help in making the story any interesting.

The story is narrated in the first-person narrative of male. That is another stunt for a women to write the POV of a man. How well did the author do the job? Not even close to average. From the very start, it is clearly visible by the way the conversation takes place. No dudes. No buddies. The converse with their nicknames - Sav ... Rags. The typical girly nicknames. I shudder at the thought of men addressing other men that way. So, though, the author had made the attempt, I think it should have been more mindful.

When I first started reading this book, I was very excited. It is not very common that there is a book on racing. Actually, it is the first novel I came across that is about racing. I had very high expectation. It continued that way for the first 25 or so pages, until when I noticed that the whole of 400 pages of the book is not just about racing. Lets just say, the author tried to put in every possible emotion into the story, which was pretty distracting for me. Very often, I strayed away from the narration and dozed off!

As the end of the story approaches, there was no more excitement. It was as if it is you, the reader, who wrote the book. You know expect the end and it turns out to be exactly the same.

Final verdict:
The story seems pretty far-fetched. However, if someone's on the lookout for a typical Bollywood entertainer, this is it. For others, who are seeking for some action, I am sorry to say that this will not keep you entertained for long.