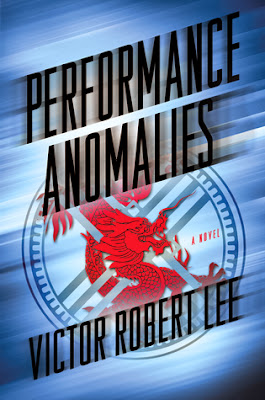 This is one of those very few books I have received through GoodReads First Reads Program. You know how difficult it is. There are thousands of members participating in each giveaway and there are very few copies to win. Almost all the times, I was one who was most likely to win. Well, I guess it is the same with you, too, if you have participated in any of those GoodReads giveaways.

However, I won this book, which was exclusively for Indians and I remember that there were as many copies as there were participants. Otherwise, how in the name of God did I even win this!

In that, a hard-cover! Big deal!

Blurb (from GoodReads):
Victor Robert Lee’s provocative debut spy thriller PERFORMANCE ANOMALIES introduces a protagonist to rival the most memorable espionage heroes. Cono is a startling young man of mixed and haunting heritage who has been gifted – or cursed – with an accelerated nervous system. An orphan from the streets of Brazil, he acts as a freelance spy, happy to use his strange talents in the service of dubious organizations and governments – until, in Kazakhstan, on a personal mission to rescue a former lover, he is sucked into a deadly maelstrom of betrayal that forces him to question all notions of friendship and allegiance.

Relevant to our times, PERFORMANCE ANOMALIES explores the expansion of Beijing’s imperial reach into Central Asia, and the takeover of Kazakhstan. Cono’s main adversary is a brutal Beijing agent whose personality has been twisted by the Cultural Revolution’s devastation of his family. Victor Robert Lee’s topical depiction of a Beijing government pursuing territorial expansion resonates with current tensions over China’s claims on the entire South China Sea.

PERFORMANCE ANOMALIES travels from Brazil and Stanford to Almaty and the Tian Shan mountains, covering a tumultuous emotional landscape along the way. The fate of an oil-rich nation the size of Western Europe is at stake. So, too, is a hidden stockpile of weapons-grade uranium. The Beijing agent craves Cono's suffering; a jihadi cell wants him dead. As the human cost of his mission escalates, Cono realizes that he must turn his strange talents toward higher deeds in the future - if by his guile he can survive the explosive present.

About the author (from GoodReads):
Victor Robert Lee lives on the road in Asia. Performance Anomalies is his first novel. He writes under a pseudonym to avoid being denied travel visas by authoritarian governments.

Our review:
Firstly, I must thank the author for sending over the author-signed, hard-cover copy of the book. Though, it has been a very long ago, I finally read it. Well, this review is like a pay-back for the author's generous offer. However, mind you, I won't hold any soft feeling for the offer and will be to-the-point judging about the book.

There is a line in the author's bio on GoodReads. It reads - He writes under a pseudonym to avoid being denied travel visas by authoritarian governments. You will understand its reason in this book.

There were a couple of lines from during the starting of the book that really took me by surprise...

Cono thought how strange it was that this seaside avenue, encircling
the heart of the ancient capital, was named Kennedy. "He paid to get his
name on it," a taxi driver had told him.
~
He guessed that Istanbul's airport was the last one in Europe where something as innocent as exercising didn't result in encirclement by an antiterrorist squad.

Well, the author already had messed with a country and a whole continent there. It was these lines that kept me hooked to the book during the start, for 25 pages or so. After that, the story became pretty slacking. All the expectations of a espionage thriller and lots of adrenaline sheds off from the very sign of the interference of Asian politics. Not everyone would be interested in politics.

To top that the protagonist's mutation that gives him a hyper-fast neurological system, taking advantage of which the author entours to explain each and every minute detail of the situation from the minor twitch on the co-character's face to the honk of a truck two blocks away. Well, of course, I am exaggerating things here a bit, but it is not completely untrue. It is one disheartening facet of the story. Too much politics, is another.

As I approached the end, I literally had to drag myself there, I started to fell story stir up a bit with a lot of twists and turns. Now, after completing reading the book, I proudly declare that it is my favourite part of the book, the end.

Final verdict:
More emphasis about the characters, less detailing of the setting, and lesser politics would have rendered the book a more readable impression.