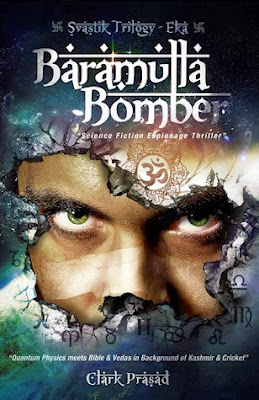 There are lot of trilogies coming these day, aren't they? It was Shiva Trilogy and now Swastik trilogy. The only trait they share is that while the former has a great tinge of mythology to it, the predecessor is multi-faceted, including 'Mythology'.

Before I got this book for reviewing, there was lot of talk about this book that was going around. I thought it was just not over-rated book. Come on, too much talk gives that impression to me. But then, after reading the book, I take all those words back.

"Science Fiction Espionage Thriller". Well, that is pretty new for me in Indian writing. I had very high hopes when I open the cover and started the book...

Plot (from the jacket):
AN ANCIENT WEAPON FROM THE VEDAS & BIBLE
ONCE HUNTED BY THE NAZIS
POWERED BY THE SOUND OF UNIVERSE
REBORN WITH HELP OF QUANTUM PHYSICS
GOING TO BE UNLEASHED ON TO THE WORLD
AND KASHMIR HOLDS ITS SECRET

Multiple intelligence agencies are tracking Mansur Haider, a god-fearing aspiring cricketer from Kashmir. His girlfriend, Aahana Yajurvedi, is trying to locate her missing mountaineering team, who vanished after a mysterious earthquake strikes Shaksgam Valley. Investigating Mansur and the Shaksgam Valley incident is Swedish intelligence officer, Adolf Silfverskiold, whose only relationship to god consists of escorting his girlfriend to Church.

A dual China-Pakistan battlefront scenario facing the Indian Home Minister, Agastya Rathore, whose ancestors carry a prehistoric secret linked to the stars. He is faced with the challenge of finding a lasting solution to the Kashmir crisis.

Which Biblical Weapon was Tested in Shaksgam Valley? Why is Mansur Haider Important? Is There a Solution to the Kashmir Crisis? Can Destiny be Controlled? Does a Cosmic Religion Exist?

About the author (from GoodReads):
Clark Prasad, alter ego of Suraj Prasad, could be called a mixed citizen. Born in a leap year (year of Rocky, All the President's Men, Omen, Hera Pheri and Kalicharan) in Lagos, Nigeria he lived most of his life in New Delhi and had his education in Lagos, Delhi, Mangalore and Kozhikode. His family background is from the town where George Orwell, author of 1984 (a dystopian fiction) was born, and where Mahatma Gandhi had re-ignited India's freedom movement - Motihari.

A pharmacist with a management degree who believes in conspiracy theories, Baramulla Bomber is his first book. His first education o he mysteries of the universe came via Carl Sagans Cosmos, and since then he never looked back on reading, watching and discussing about the universe. He grew up during the cold war days with BBC radio was one of his mysterious companions as a kid, when his father played the news regularly every day. World War II news and documentaries on CIA-KGB tussle kept him engaged that time.

As a kid he wanted to be an archaeologist or an astronaut, but fate had its own road and he got involved with Mr. Carbon akaChemistry. Currently he is a healthcare management consultant, based out of Bengaluru, Planet Earth.

This is one of the best cover designs from an Indian authors I've read these days. If someone comes across this book in a bookstore, I am certain, he would move on without checking out the book. Even the title, is very displayed on the cover. Apart from these, the cover design scores a perfect-ten for the field of aptness.

When it comes to the back cover, it is a downer. It the exact opposite of the front-cover. The is a woman, a person pointing the gun at something and of course the cricket stumps. Though cricket held some significance in the story, I think it is completely unnecessary to have the cricket-stumps on the back cover. And the people. I don't understand what made the designer to include them in the cover. It all adds up as an immature work. I strongly suggest the publishers change the back-cover in their next edition as it might serve as a spoiler.

Just those four words don't state the genre of the book. The books deals with various other genres, too - religion, politics, sports, technology, archeoastronomy, mythology, to name a few.

There are quite a few thriller making rounds in the Indian literary market. I have read quite a few of them. Most of them were very disappointed. They are either a cheap imitations by international authors or lacked in the field of logic. Most of them were written like those B-grade Bollywood movies, where the hero beats a pack of villains single-handedly. But this book is nothing like that. In fact, this is one kind of thriller I admire. Every detail mentioned in this book was a work of loads and loads of research. One is made aware of that fact from the very first chapter.

I love Dan Brown books, for they are as information as they are entertaining. In the same way, I liked this book. There have been many facts in the book that I was totally unaware of. Apart of entertaining, this book taught me many a things I wouldn't have known otherwise.

The story spans almost throughout the globe. Intelligent agencies of various countries are brilliantly used by the author. For the most part, the story revolves around a mythical weapon using the ancient technology from the Vedas and the Bible, which if fallen upon the wrong hand would threaten the very foundations of mankind.

A thriller is said to be best, if the reader after reading the book goes about investigating about facts and fictions of the details mentioned in the book. I felt the same in the case of this book.

Though the narrations gets slagging at various points, there anticipation keeps ones going no matter what.

After reading the book, I felt a strong need of a strong villain in the story. There were couple of killers in the story, but they weren't threatening enough. Also those killer are in the view from the very start, so it leaves the book devoid of the mystery.

Overall, it was a fine book and worth a read...

The book was received as part of Reviewers Programme on The Readers Cosmos.