The Diving Bell and the Butterfly by Jean-Dominique Bauby 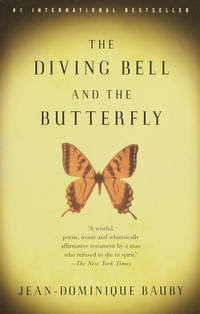 Long back, probably about 4 years ago, when I first saw Into The Wild movie, I instantly became its fan. Soon after I read the book. After which my life took an entire 'U-Turn'. It was a new me. Everything, even my perspective had undergone a makeover.

That is when I was searching like movies of Into The Wild. That is when I stumbled upon a French movie, titled 'The Diving Bell And The Butterfly'. The title made little sense. The connection between the two things mentioned in the title made even littler sense. Must have been something poetic, I thought.

Actually I was entirely not aware of the face that the movie was in French. Of course, I know that it is a French movie, but the title of the movie I downloaded was in English, so I thought it to be in English. I carried on watching the movie half-hearted, but at the end, I thanked my stars for not overlooking the movie, for not deleting it when I learnt that it was not in English.

After a long time of watching the movie, I read the book. At first, I wasn't aware that the movie was a book. When I saw protagonist write this book in the movie, I thought it must have been a French book. But the thought of the work-translation never crossed my mind, until I stumbled upon this book in a small, dingy bookstore which sold used book.

That is how I came to read this book.

Plot (from GoodReads):
This memoir was literally composed with a blind of an eye. By turns mischievous, angry, and wistful, the former editor French Elle shares the joys and sadness that crept over him when he became afflicted with a disease that left his entire body paralyzed -- except for his left eye, which he learned to use with a blinking alphabet to communicate with the rest of the world. The Diving Bell and the Butterfly is an unforgettable account of Bauby's own determination to live as fully in his mind as he had been able to in his body.

About the author (from GoodReads, as well):
Jean-Dominique Bauby was a well-known French journalist and author and editor of the French fashion magazine, ELLE.

On December 8, 1995 at the age of 43, Bauby suffered a massive stroke. When he woke up twenty days later, he found he was entirely speechless; he could only blink his left eyelid. This rare condition is called Locked-in Syndrome, a condition wherein the mental faculties are intact but the entire body is paralyzed. Bauby also lost 60 pounds in the first 20 weeks after his stroke.
Despite his condition, he wrote the book The Diving Bell and the Butterfly by blinking when the correct letter was reached by a person slowly reciting the alphabet over and over again. Bauby had to compose and edit the book entirely in his head, and convey it one letter at a time. To make dictation more efficient, Bauby had his interlocutor read from a special alphabet which consisted of the letters ordered in accordance with their frequency in the French language. The book was published in France in 1997. Bauby died just ten days later of pneumonia. He is buried in a family grave at the Père-Lachaise cemetery in Paris, France.

The mere thought of situation of the author is very sympathetic. I doubt even our wildest imagination could least fathom what he must have been going through all those days. But once you read this book, his thoughts, you feel anything but sympathy towards the author. Or rather you will feel an acute urge to salute the author for the way he had written this book - open, funny, whimsical, ironic and poetic.

Srinivas, who read this book before me, said to me recommending this book, "It is unbelievable how poetic the author wrote."

I answered, "What's so great about you? Lie tied to the bed for a whole week, every chore of yours attended by some assistance and you will be equally poetic."

Well, that was before I read this book. After reading the book, I take all those words back. And everything negative I said about this book or the author. It is so fascinating to imagine someone think in such a way even in such dire a situation.

There is phase in the book,

Reflected in the glass I saw the head of a man who seemed
to have emerged from a vat of formaldehyde. His mouth was
twisted, his nose damaged, his hair tousled, his gaze full of fear.
One eye was sewn shut, the other goggled like the doomed
eye of Cain. For a moment I stared at the dilated pupil, before
I realised it was only mine.

How can someone be so ironic to themselves? Just mind-blowing.

On the whole, the book is a must read. To the left page of the title page, in my edition, there is a picture of the author bound in his wheel-chair, gazing at the sun-set from the balcony of his hospital. It was damn touching. Also, on the very second page of the book, there is a note, which made me even more senti,

[The author] died just two afters the French publication of this book.

It was like with the sigh, he released recollecting the effort he put in jolting down this book, his breathe passed away. Though it was infinitely saddening that he couldn't live, it is somewhat comforting he atleast knew that his testament had seen the day-light.

After a very long time I feel like I have read a book which made my look like a sissy!

Recommendations:
To every human being with a heart...

Title: The Diving Bell and the Butterfly

Tagline: A memoir of life in death