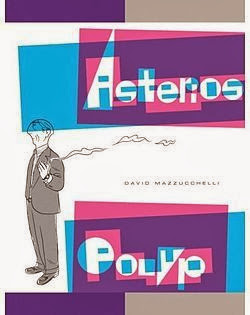 
This is the first Graphic Novel I have ever read. Yeah, believe me, I never even read comics for that matter.

It is Srinivas, the other author of this blog, who developed a keen interest in graphic novels lately. In fact, it is he who first made me aware that there exists something like Graphic novels. Of course, I knew Batman, Superman, et al, but they are comics.

At first, I had difficulty understanding difference between a Graphic Novel and a Comic. It is Srinivas who made understand and it was simple.

Well now, after reading the book, I must say that it was a very unique experience. The experience was nothing like reading a book. Neither was it like watching a movie. It was more like watching a cartoon-movie on mute, with subtitles. No music, no background score, but the emotions are delivered with equal measure.

The triumphant return of one of comics’ greatest talents, with an engrossing story of one man’s search for love, meaning, sanity, and perfect architectural proportions. An epic story long awaited, and well worth the wait.

Meet Asterios Polyp: middle-aged, meagerly successful architect and teacher, aesthete and womanizer, whose life is wholly upended when his New York City apartment goes up in flames. In a tenacious daze, he leaves the city and relocates to a small town in the American heartland. But what is this “escape” really about?

As the story unfolds, moving between the present and the past, we begin to understand this confounding yet fascinating character, and how he’s gotten to where he is. And isn’t. And we meet Hana: a sweet, smart, first-generation Japanese American artist with whom he had made a blissful life. But now she’s gone. Did Asterios do something to drive her away? What has happened to her? Is she even alive? All the questions will be answered, eventually.

In the meantime, we are enthralled by Mazzucchelli’s extraordinarily imagined world of brilliantly conceived eccentrics, sharply observed social mores, and deftly depicted asides on everything from design theory to the nature of human perception.

Our review:
Like I have already said, this is my first graphic novel I've ever read. I noticed that there is a advantage not having to write tons and tons of words to describe when it is a graphic novel. But it is no child's play to draw each scene with a precision to a scratch.

I was more moved to know that all these graphics are done by the author himself. Yeah, I must be a fool to think that someone else will draw the graphics for the author.

Like this is my first graphic novel to read, I have never ever came across this author. In fact, it is by accident that I came to read this book. All the credits goes to Srinivas, the other author of this blog. But after reading this novel, I pretty moved. I didn't know graphic novels can be so much intriguing. I hope to check out other books from the author in future.

About the story, it is pretty hooking and touching. Filled with nostalgic, the illustrations were damn too well done. It has very impressing characters and the each dialogue contained such degree of power that they keep etched into one's memory for many days to come. Check out the lower part of the review to read a few lines from the book.

Overall, it was pretty touching book. A good start for a noob like me. However, throughout the read I felt a gnawing feeling that there was something amiss. However, at the end, I was left feeling great.

Few random lines from the novel...

Life is stressful, dear. That's why they say, "Rest in Peace."

How can we call death-about which we know nothing- the opposite of life, when we barely comprehend life itself?

To live as I understand it is to exist within a conception of time. But to remember is to vacate the very notion of time.