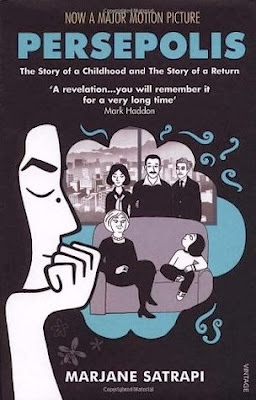 I use Grammarly's plagiarism checker because it helps me find glitches in the prose and is way better than many other copy-cat applications.

He kept ranting about this book for so long and at the end, I was adamant to read this. What started as a fleeting glance into the book carried to over 75 pages and I took a few more leaps to complete reading the novel.

I am still skeptical about how many stars to give this book. Maybe, I will decide before I reach the end of this review.

Blurb (from the jacket):
Wise, funny, and heartbreaking, Persepolis is Marjane Satrapi’s memoir of growing up in Iran during the Islamic Revolution. In powerful black-and-white comic strip images, Satrapi tells the story of her life in Tehran from ages six to fourteen, years that saw the overthrow of the Shah’s regime, the triumph of the Islamic Revolution, and the devastating effects of war with Iraq. The intelligent and outspoken only child of committed Marxists and the great-granddaughter of one of Iran’s last emperors, Marjane bears witness to a childhood uniquely entwined with the history of her country.

Persepolis paints an unforgettable portrait of daily life in Iran and of the bewildering contradictions between home life and public life. Marjane’s child’s-eye view of dethroned emperors, state-sanctioned whippings, and heroes of the revolution allows us to learn as she does the history of this fascinating country and of her own extraordinary family. Intensely personal, profoundly political, and wholly original, Persepolis is at once a story of growing up and a reminder of the human cost of war and political repression. It shows how we carry on, with laughter and tears, in the face of absurdity. And, finally, it introduces us to an irresistible little girl with whom we cannot help but fall in love.

Our review:
Every aspect of a Graphic Novel was fascinating when I read my first Graphic Novel - Asterios Polyp by David Mazzucchelli. And this book, my next Graphic Novel, is so similarly distinct to the former one. Everything right from the prospect of their cover designs were widely varying.

That was that. Considering the narrative style, I liked Perse. Considering the illustrations and detailing, I liked Asterios Polyp. So its just the preference and perspective. I would recommend either of these to people according to their taste.

Actually I liked the first volume more than the second. It had more of the war and the innocence of the child is portrayed very cutely humorous. When it comes to the second volume, the humorous part with the innocence is vanished. It deals with more of girl's stuff. In more than one instance, it felt like I was reading a chic-lit. There was more narration in the second volume than the first. It was almost like a novel. Long lines of detailing and boring bits of dialogues was really a downer.

If not for the second volume's monotony, I would have given the book four stars out of five.

Final verdict:
It's finally up to you to read or not read this, based on whether you like humorous narration or detailed illustrations. In any case, this book doesn't disappoint you as a Graphic Novel.