Where The Rainbow Ends by Anurag Anand 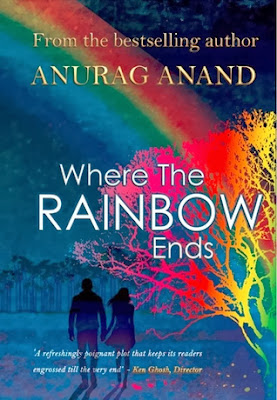 Like various books from Srishti Publishers, this book also was sent by Arup Bose.

This is one of the four other books sent by Arup. And this one has the second best cover design from among the four, which is the reason I have read this second, after The Storm in My Mind by Ayaan Basu.

Even the most artistic of imaginings can sometimes seem callow in the face of truth. That which appears may not be and that which lies hidden might just be the stark, naked face of reality.

Rahul had everything going his way – a soaring career, a happy family and all else a man his age could yearn for. And then suddenly his life began to crumble all around him, disintegrating element after precious element, leaving him to watch in helpless horror.

Where had he gone wrong? Was there still hope for redemption, even a solitary ray that he could cling on to?

Avantika, a pretty, vivacious girl who had come into Rahul’s life by pure accident, literally, has suddenly gone missing. Just like that, without as much as a trace.

Where is Avantika? Will Rahul be able to find her? Is it her own past that has come back to consume her or is it something even more vicious and sinister?

Shalini, Rahul’s first love and a girl accustomed to leading life on her own terms. Hailing from a family that exerts considerable influence in the galleries of politics and power, she certainly has the wherewithal to impact a lot of things. Even lives.

Is Shalini fostering a grudge that could displace not one but many lives? Could she be the one behind Avantika’s mysterious disappearance?

Our review:
Like I have already mentioned, I pretty much liked the cover design of this book.The depiction of rainbow with deep sea blue colour is pretty attractive. If I happen to come across this book, I would have certainly stopped by and checked out the book.

Actually I didn't go through the author's name before reading this book. I thought him to be a new author and continued to read. But when I noticed the author's name, it rang some bells. Dating back to mid-July, 2011, they were the days I was new to reading and read most Indian contemporaries. In the process, I read Quest for Nothing by this same author. Actually when I first read the plot of that book, I came to understand that it was a thriller, but it was not. It turned out to be entirely something different. I was very disappointed that I gave that book only one star.

Why am I mentioning all these details? Because it is almost the same in the case of this book. Only that I didn't have any preconceptions to be disappointed.

However, I think I noticed a few similarities between The Quest for Nothing and this book. Both started off as a mystery thrillers. In this book, it starts off with the disappearance of a very important character and the protagonist flies to Delhi from Mumbai in search of her. I was pretty excited at that.

And then follows a long stretch of a love-marriage-turned-soar story. Yet the book keeps you hooked to it. The missing of the character isn't solved yet. It is in the last part of the book that the mystery solved in just a single chapter! Another similarity. Both the books have a very emotional, touchy and twisty end.

Since I was totally not convinced that the story was a mystery thriller, I wasn't disappointed at all. In fact, the end had its effect on me and the final impression with which the book left me was 'fine'.

On the whole, it was a touchy book to read, with its tinge of mystery and romance.

Title: Where The Rainbow Ends