Ajaya: Roll of the Dice (Epic of the Kaurava clan, #1) by Anand Neelakantan 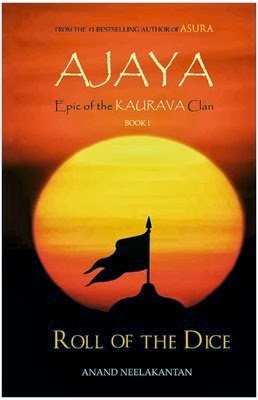 Like various other books from Leadstart Corps, this book is also sent by Parag Mayekar.

You can find the other books from Leadstart Corps here: BR with Leadstart...

It was quite a hype when Asura, the other book from the same author, had topped the best selling list of almost all prominent online book-selling portals for several weeks. It had re-written the entire status of the Leadstart Publishers.

Well, it deserved it. Just read the plot and the mere uniqueness of it will tempt to read it. If I hadn't had so long a list of tbr books, I would have definitely given that book a try.

The plot of this book is very similar to the author other book - Asura. I wonder, whether it is me or are the plots so similar. However it is quite innovative to even get the thought of narrating a story from the other side, the losing side, the - oft negatively portrayed - negative side.

Blurb (from the jacket):
THE MAHABHARATA ENDURES AS THE GREAT EPIC OF INDIA. But while Jaya is the story of the Pandavas, told from the perspective of the victors of Kurukshetra; Ajaya is the narrative of the ‘unconquerable’ Kauravas, who were decimated to the last man.

***
At the heart of India’s most powerful empire, a revolution is brewing. Bhishma, the noble patriarch of Hastinapura, is struggling to maintain the unity of his empire. On the throne sits Dhritarashtra, the blind King, and his foreign-born Queen – Gandhari. In the shadow of the throne stands Kunti, the Dowager-Queen, burning with ambition to see her firstborn become the ruler, acknowledged by all.
And in the wings:
Amidst the chaos, Prince Suyodhana, heir of Hastinapura, stands tall, determined to claim his birthright and act according to his conscience. He is the maker of his own destiny – or so he believes. While in the corridors of the Hastinapura palace, a foreign Prince plots to destroy India. And the dice falls…

My take on the book:
The cover design is one of the most magnificent aspect of the book. There were many instanced during the read when I kept staring at, feeling, the cover of the book. The central part - the Sun and the flag - have a glossy feel to them, which just amplifies my love for the book.

Before I go further into the review, I would love to thank Parag - who sent the book - and the author - who made it happen - for the author-signed copy.

The book starts with an author's note on why, rather how, he stumbled upon the idea for this book. Itself had planted the seeds of interest into me, which didn't decrease, rather increased manifold, throughout the read.

I am not certain how far the book holds the facts. I mean, its an epic, none of it can be real. But considering the original version of the epic that is in Sanskrit, I don't know how far this book resembles to it. There is no way of confirming either. Neither do I know Sanskrit, nor I expect the original text being narrated to such a detail.

Also, almost the entire book portrayed that Pandavas had more negative shades in their character than the Kauravas. Especially Duryodhana, the eldest Kaurava, was portrayed as if he was the most innocent and kindest of souls in the whole of Mahabharatha.

At the start of the story itself, I knew Duryodhana is the untitled hero of this tale, but mind you it is not just about Kauravas, but the Kaurava clan in general, which included everyone including Karna, Eklavya, etc. It was pretty difficult to believe that such a kind soul, like Duryodhana, was considered the villian of the epicm according to this book.

There are various parts of the book that are delivered describing the negative shades of the Pandavas. It was pretty impossible, for I who had read Mahabharatha very recently, to come in terms with this perspective of the book. Rather, it is better to read this story as an entirely different epic. Yeah, it helps. Concentrate of the morals and the messages and stop comparing both perspectives of the epic.

There was another aspect of the book that I felt needed to be attended - the over-descriptiveness. The author's love for detailing at each point of the story was getting on my nerve every now and then. Without that I would rated the book a whooping five outta five...

Title: Ajaya: Roll of the Dice

Tagline: Epic of the Kaurava clan