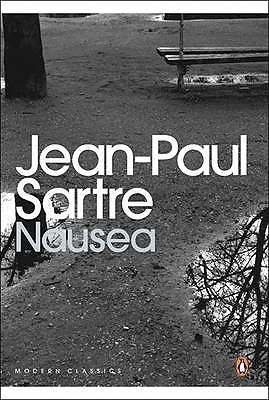 Another book of Srinivas's - the other blogger of the blog - taste.

Though I am the one who reads varied range of books and genre, Srinivas is the one who reads more serious stuff. Our tastes rarely overlap, so that is one reason we don't many books in common that we have read. However, a spade is a spade, so some books unmistakably win both of us - for instance, take Fahrenheit 451.

I didn't start reading this book on his recommendation. He rated this book five-stars and I was not surprised. If the book is famous I could predict he would like it. But on GoodReads, this book seems to be the most read book under Philosophy.

Firstly, let me make it clear that I am no philosophical person. Yeah, I like some well grammared quotes by some philosophers, but that was that. My territory in philosophy is very limited and constrained.

And with this book, I think it would take ages for me to regain courage to try and explore the genre again...

Blurb (from the jacket):
Nausea is both the story of the troubled life of a young writer, Antoine Roquentin, and an exposition of one of the most influential and significant philosophical attitudes of modern times – existentialism. The book chronicles his struggle with the realization that he is an entirely free agent in a world devoid of meaning; a world in which he must find his own purpose and then take total responsibility for his choices. A seminal work of contemporary literary philosophy, Nausea evokes and examines the dizzying angst that can come from simply trying to live.

My take on the book:
Call me immature, I don't care, I felt this as a utter waste of time. Just like it's cover design. I look that cover picture and ponder on its importance and aptness with the story. Since I had not entirely - not even 25% - understood it, I couldn't relate the picture to the story. However, I feel it is very unlikely to relate to the story. The story is about every small things that happen around someone.

This book talks about Existentialism. I read the book; searched the entire web and was confronted with various unbreakdownable definitions; and in the end, settled upon one simple meaning of that philosophy.

It is about the existence of other unlively things happening around an existence.

Mind you, I could be entirely wrong, but I don't care, I don't give a fuck what that means. I don't understand this book in the first place.

However, in the end, there are few, little nuggets of beautiful insights in this book, which make the book really worth the while. Nonetheless, I feel it is an utter waste of time.

Overall, I feel the book is a potpourri of a few precious nuggets and way too many exaggerated perceptions.