Marvels & Mysteries of the Mahabharata by Abhijit Basu 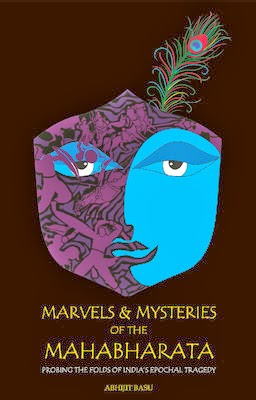 In this cauldron of great illusion, with the sun as fire, day-night as fuel; using months and seasons as stirrer, Time is cooking all beings that is the message. ~Yudhishthira, in the Mahabharata's Vana-parva 313.118

The Mahabharatha never ceases to fascinate. By far the longest of the world s epics, it transcends the limitations of genre. History, encyclopaedia, philosophy, scripture, warrior saga, it encapsulates all these in one exalting epic tragedy underscoring the truth in the ancient adage that the whole knowable world is Vyasa s leftover.

The Great Epic of India encompasses an awesome interplay of human effort and destiny, set against the backdrop of inexorable Time. Marvels and Mysteries, with its lucid and engaging narrative, seeks to unravel some of its enigmas: the characters of Vyasa, Krshna, Yudhishthira, Arjuna, and Draupadi; aspects of the Mahabharatha s historicity; its medley of interpretations; the stupendous text-critical project to sift its perceived accretions; its inter-relationship with the Ramayana and other epics; and its universal relevance brought home through a series of trans-cultural comparisons.

This is the one book about the Mahabharatha which everyone will love to read and gift.

My take on the book:
This is the first hardcover we have ever received for reviewing. My second puppy-love, after my fetish for bookmarks, are hardcovers. For, of course, obvious reasons. This might be pretty offending to the paperbacks, but reading a hardcover feels more authentic and real. No offense, paperbacks. Still most of my books are paperbacks.

However, basically, it is our first hardback for reviewing, so it holds a special place for us. Thank you, Parag.

Why another book on Mahabharata? That is the first question that arouse in my mind. Well, my question itself has a flaw. Of course, the book is on Mahabharata, but its Mahabharata. If you understand what I mean. There are scores of books on Mahabharata, but none - as far as my knowledge permits - that investigates into the facts and non-facts of it. The reality of the very existence of its, the epic's, characters.

I must say that the author had tried but failed in captivating my interest. I mean, this book is a more of a reference book than a normal read. Only readers curious to know the facts of Mahabharata will be engrossed in this read. The others, who had all his knowledge of Mahabharata only from the few novels I had read, would be more lost than informed by this read. Well, however, it is logical that only people who want to learnt he facts will buy and read this book. Basically, I want to say that the book and it's contents are pretty complicated for the people who are ill-informed. Like me - who doesn't even know how many parvas Mahabharata is composed of. That is to say the least.

Overall, it is a well-researched, sophisticated and a perfect referential book for anything dealing with the authenticity of Mahabharata and its characters...

Title: Marvels & Mysteries of the Mahabharata