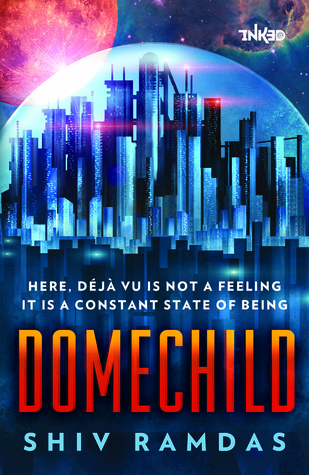 A suicidal machine. A child with a secret that can change the world. The man trapped between them.

In the City, where machines take care of everything, lives Albert, an ordinary citizen with an extraordinary problem: Hes being blackmailed into becoming the first person in living memory to actually do something.

What begins as a chance encounter with an outlaw child swiftly spirals out of control as Albert is trapped between the authorities and the demands of his unusual blackmailer. Forced to go on the run for his life, he finds himself in a shadow world of cyber-junkies, radicals and rebels, where he discovers the horrifying truth behind the City, a truth that will make him question everything he has ever known.


About the author (from GoodReads):
Shiv Ramdas has hosted radio shows, sold advertising space, helped design sets and worked in both print and online media. He has also written advertisements, radio jingles, and numerous resignation letters. Domechild is his first novel.


When the author contacted us to review this book of his, I was like,

However, my childish obsession had even deterred this book all this while, until I finally decided to give this book a read.

I loved the very tagline of the book - Here, Deja Vu is a not a feeling. It is a constant state of being.

Well, that line appeared in the very first chapter of the book itself and I was pretty disappointed when it had little to do with the story itself. The author has used it to define the echo of the society the protagonist lives in, where every other object of a sort is a doppelganger of each other. And that was it. No more mention of the Deja Vu.

Though that was disappointing, the author had made up with the rest of the story. It was not long before I was out of that depression and got immersed in the vividness of the author's narration.

There was another negative of this book. In this review, I will concentrate more on the cons of this book. Because it has more pros, which are obvious and don't need any mention of them. The dystopian society described by the author was clinched. Almost all dystopias throughout had been describing the same society. Robot-ridden, methodical societies. There was nothing fresh about that, but then the soceity is just the part of the story. The story had a greater objective. On one unusual day, the author, lost in his introspection, enters an area that has been prohibited and his life is never the same. This novel also has a group of rebellious people, who had taken refuge outside the, so called, society and leading their life their own ways. When authors gets to them, he will witness and starts to reflect on their own problems and the so goes the story revealing various emotions of a human being.

I think the book would need a good trimming, to eradicate a lot of redundancy. Over-exaggerated description, leaving little for the reader's imagination, is seriously a downer for this book.

Overall, it was a great read. A rare in the books we get to review these days...

Tagline: Here, Deja Vu is not a feeling. It is a constant state of being.