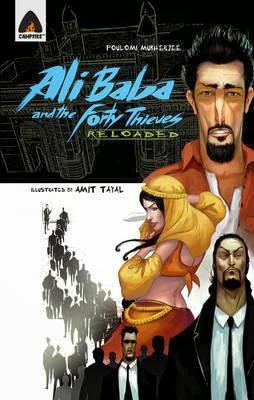 I have encountered this book on a blog-post where it is listed as one of the most famous Indian Grpahic Novel.

I have always wondered why Graphic Novel? Well, I can't answer. Perhaps, no one can. It is just the feel of it that is most interesting about it.

Blurb (from the jacket):
Ali Baba’s life is far from perfect. He is a poor auto rickshaw driver who is honest and hardworking. He tries to lead a simple life, but destiny has other plans for him. A chaotic sequence of events leads him, and a gang of forty thieves, on a merry chase through the suburbs of a modern metropolis. He outwits them, and with a little help from others, manages to make a place for himself in the social world.

The world of Arabian Nights gives way to modern day Mumbai, the men wear suits and carry guns, their chosen steed has wheel instead of legs. Ali Baba and the Forty Thieves: Reloaded is an attempt to depict the impossible situations our hero ﬁnds himself in, and how a twist of events, a few good friends and presence of mind, delivers him from the brink, every time. But more importantly, it is a story about courage and wit, and about the ultimate triumph of good over bad.

My take on the book:
Though I haven't read the original Ali Baba and the Forty Theives story, I had seen it in various movies, in various languages. I believe, every language has this movie filmed - either or both in movie or animation. So I had a very good idea of the plot.

From the very first illustration in the book, I understand the impression of the word 'Reloaded' in the title of the book. It is the modern day version of the classic folklore. There was little magic in this version, and more logic. The swords were replaced by knives. The great stretch of treasure was replaced by a pyramid of golden bricks. The magical cave in the middle of the desert is replaced by the metallic container of the docks. The thieves are replaced by Russian mafia. And so forth.

Though the tale was heard a zillion before now, the author had taken liberties to alter few parts of the story to suit the modern setting and to interest the readers, which evidently helped. At least in my case.

Overall, it was a fine read. I ruffle through the pages and I wonder how much hard work it might have consumed to create such a colourful, illustrious book. But that doesn't make me partial anyway.