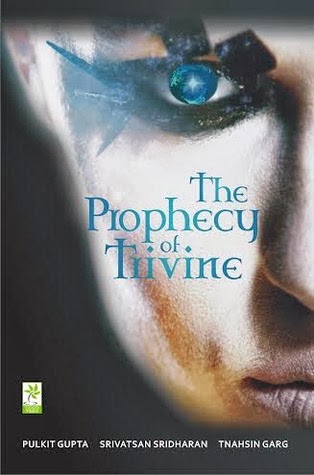 One of the authors, Tnahsin, have contacted us to review the book.

This is first time a book by three authors are sent to us for reviewing - and I've ever read. Of course, there were anthologies but dozens of authors. But a single story by a triplet is a first I have come across.

Why am I stressing so much on that aspect of the book - the three authors? Well, it is a feat to write a book with three active brains, which in almost every instance have colliding thoughts and the result would be nothing better than a probably debate.

That is why I think it is quite a feat to write a book and publish it in the first place. And to top it all, it being good.

Actually, there are very few Indian authors who write Sci-Fi. Also, Fantasy and this book turned out to be both. Being the one who is always out on the lookout for new experiences, I was game for this book. I started reading this book pretty hesitantly, not knowing what to expect from it...

Blurb (from this jacket):
An emissary of an advanced alien race travels to the Earth to undertake responsibility of an experiment that has gone out of control. The outcome of this fateful experiment, which was conceived millions of years ago by her species, now rests in her hands. As she prepares to deliver her final judgment, she comes across three young men in a sacred forest who change her life forever.

These three men- a scientist, a hacker and an artist, happen to take refuge in that forest, trying to escape from the oddities of their own unfair lives. Struggling with their dreams and demons, they begin to explore the dark and paranormal behavior of the forest by forging a companionship. From the rare flora and fauna breathing alive on the ground to the deadly wide expanse of the whimsy black sky, everything they find is yet another puzzle unsolved.

Little did they know that four of them hold in their hands the future of mankind and much beyond imagination, they are connected through an ancient Prophecy that was long lost in the sands of time.

Our take on the book:
I would like to start the review by showing the gratitude for the author - all 3 authors - signed copy of the book. 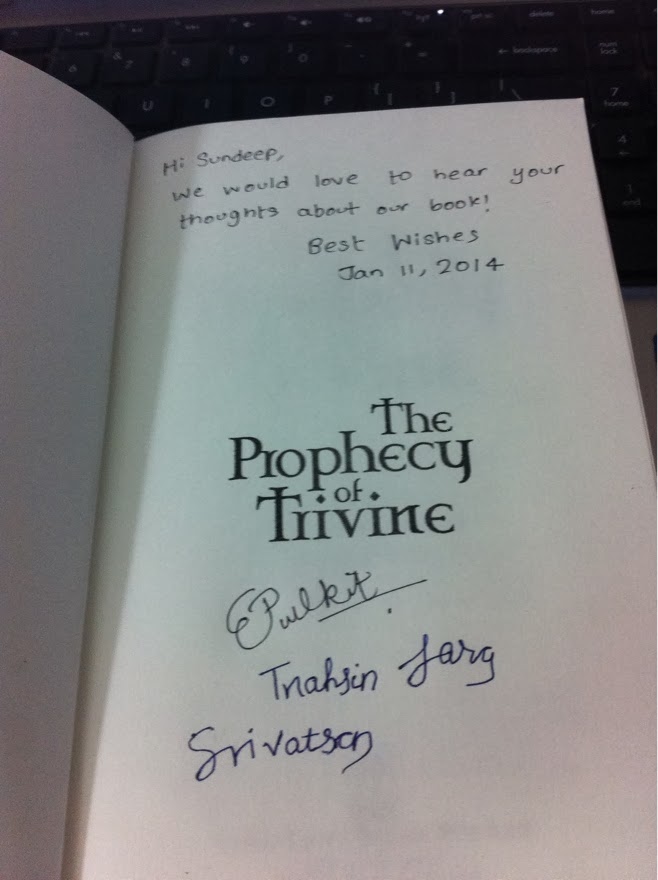 Thank you so much for the signatures, you don't know how much
it means to us - especially me.

Before everything else I must talk about the publishers. It has been pretty long since I talked about publishers. Good Times Books. Pretty peculiar a name, ain't it? I don't know much about them, not even about their other books. They seem like a new publishing house. Hoping to read more of their book. By the way, their website from the back-cover is: www.goodtimesbooks.com

I was hesitant to read this book because it was a rare gem. People tend to fear rare substances, don't they? It was for me, with this book. It was a Sci-Fi, a Fantasy, from not 1 but 3 Indian authors! It was the Fantasy part that made me hesitant, even though I love the genre. Fantasy is a genre that has limited limits. It is boundless. The compulsory rules of the reality could not only be broken but also thrashed to atoms and a new world could be created which defies all the known Earthly constraints. And you can't complain. There is so much power. There is so much freedom. I was scared that the authors might misuse that freedom and destroy the entire book.

But now, after reading the book, I was proved otherwise.

I don't like the cover design that much. Well, it perhaps depicts the only villian of the story, Xeno, but I think it is not attractive, dramatic, or interesting enough. Could be easily overlooked as a third-grade novel, which apparently the book isn't.

As the story commenced I was scared that I might pass away any moment. All my presumption. Nothing of that sorts happened. In fact, I didn't take a wink throughout this read. I might even have completed this book in one-go, if not for my busy schedule and happening examinations.

Another - and the huge - negative aspect of the book is the part where there is the discussion of secrets of Nature. Maybe it was significant to the story, but the discussion seemed pretty cliched. Some recent novels I have read portrayed almost the same debate about it - the novels like, The Guardians of Karma and Age Of Hiblisk.

Other than that, the book is beyond my expectations. Was a pretty pleasant and recommendable read.

Title: The Prophecy of Trivine