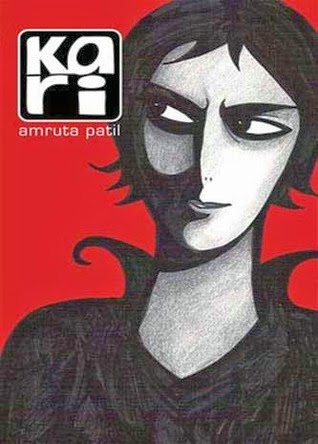 I don't know. In fact, there are more reasons to not promote graphic novels against novels. They have illustrations limiting the readers' imagination, which is the key aspect of reading a typical novel.

Yet, I have this strange sense of fascination for graphic novels. How much ever I try to reason my way out, I fail. Miserably, at that.

Of course, the graphic novels are vivider. The characters of a novel take shape, in real dimensions and come alive. There is no wasting time, describing the physicality of the character and her expression, etc.

Well, in simple words, I love graphic novels for their vividness, perhaps.

Blurb (from the jacket):
They were inseparable – until the day they jumped. Ruth, saved by safety nets, leaves the city. Kari, saved by a sewer, crawls back into the fray of the living. She writes ad copy for hair products and ill-fitting lingerie, falls for cats and roadside urchins, and the occasional adventuress in a restaurant. As Danger Chhori, her PVC-suit-clad alter ego, she unclogs sewers and observes the secret lives of people and fruit. And with Angel, Lazarus, and the girls of Crystal Palace forming the chorus to her song, she explores the dark heart of Smog City – loneliness, sewers, sleeper success, death – and the memory of her absentee Other.

Sensuously illustrated and livened by wry commentaries on life and love, Kari gives a new voice to graphic fiction in India.

My take on the book:
This is the first Indian graphic novel - in fact, any graphic novel - I held in my hands. Not a comic, mind you, but a graphic novel. Also, this is my graphic novel that I have read with illustrations of crayons. Like you could see on the cover picture of the novel, the entire novel is illustrated with crayons.

Only having starting to read this novel I learned the reason behind's Srinivas's choice of book. It is a Lesbian story. The lead character is a Lesbian, and that was that. The Lesbian part is very minimal in the story and deals greatly with deep insights into sex, love and life.

I learned after reading four Graphic Novels that like every author has his own writing style, every Graphic artist has his own style of illustrating. The crayon-filled illustrations in this book, was no compare to the painting-like illustrated novel of Blue Is the Warmest Color or the detailed illustrations filled Asterios Polyp, etc.

The story was a very typical one. Perhaps, one of those typical contemporaries releasing every other day. Stating random instances and happenings in the life with a such of nostalgia. But there are various parts of the book that really touched and the insights which I felt couldn't get any truer.

One aspect of the novel I didn't quite like was the author's fetish for only about two or three illustrations per page - sometimes, only one - with a huge paragraph of narration. There were fewer dialogues/ And also the language of the paragraph are pretty difficult to understand. That is also due to the font in which the entire story is narrated. It was getting tougher every moment to differentiate 'n' from 'r' and vice-versa.

Though the story was sensible, there was something amiss. Something unnotable, but unoverlookable. I thought for a very long time to contemplate about that missing thing, but there was no way. So I call it, for now, 'soul'. Yeah, the story was missing the soul. It is very rare I rate Graphic Novels this low. Just a little meaning into the story and it would have scored a perfect-ten.