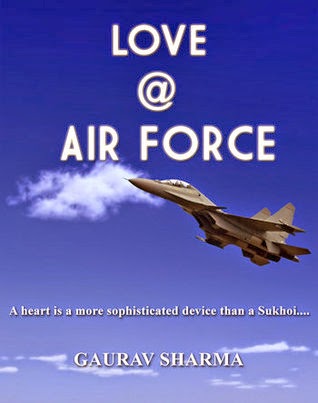 An unhappy Sergeant-Sushil Awasthi feels that his circumstances dumped him into doing drudgery in the Air Force and he deserved better out of life. Grumbling often, he accuses his wife, his parents and even Air Force for his agonies. When he finds that, the newly arrived medical officer, Wing Commander Shabd Mishra is his best friend of school days, his inferiority complex plunges further down.

The Wing Commander is still hankering after his school day’s crush Soumya despite knowing of her being married to another Air Force Officer, who too, gets posting at the same station.

How to things shape up when three classmates get together?

What fate does the love story of the lovelorn Wing Commander meet?

How do others around, the officers and the non officers, react to the friendship between a Sergeant and a Wing Commander?

Welcome to Air Force Station Agra to know how the Air Force reins the lives of its employees.

About the author (from the book):
A mathematics teacher, Gaurav Sharma has been writing poems since he was eight. He trisects the age of his passion into cricket, mathematics and writing. As a school boy, he was madly in love with cricket, then, mathematics became his passion and lately the writer in him grew restless. Lunacy for his dreams, he claims, has helped him being a published writer. As a writer, he doesn't want to be just a storyteller, but yearns to create a stir.

My take on the book:
The cover of the book was very discouraging. It seems like a new Indian Airforce campaign poster. But that word, LOVE, written in bold, capital letters stands out the most. Seriously, Love and Air force?

I started off the book half-heartedly, but believe me now, after reading the book, I have a total different prospect about the book. It is one of those few books, which go by the saying - Don't judge a book by it's cover.

It was pretty courageous an act to blend two contradicting aspects like Love and Air Force. Thanks to the author, I had a brief peek into the inside world of India Air Force. Though complicated, I pretty much liked the ambiance.

On the whole, the book qualifies for a good, evening read and nothing more. A treat for Romance-lovers of course...

Tagline: A heart is a more sophisticated device than a Sukhoi...