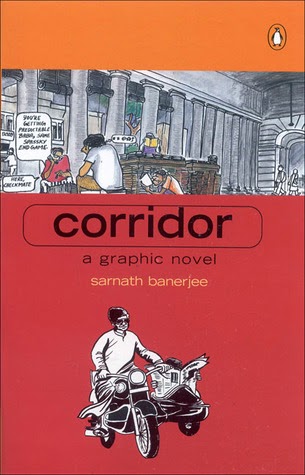 In the heart of Lutyens' Delhi sits Jehangir Rangoonwalla, enlightened dispenser of tea, wisdom, and second-hand books. Among his customers are Brighu, a postmodern Ibn Batuta looking for obscure collectibles and a love life; Digital Dutta who lives mostly in his head, torn between Karl Marx and an H1-B visa; and the newly-married Shintu, looking for the ultimate aphrodisiac in the seedy by-lanes of old Delhi. Played out in the corridors of Connaught Place and Calcutta, the story captures the alienation and fragmented reality of urban life through an imaginative alchemy of text and image.

My take on the book:
Corridor, popularly cited as the 'First Graphic Novel of India'. That was reason for me to pick up this book.

Firstly, the book is so small. Though, it seems thick, due to the thick paper used for printing, but it only has 112 pages and is the size of a typical novel. All the graphic novels I had read till now were pretty outstanding, in every aspect I mean. Taller than ordinary novels; fewer pages; ordinary paper; either in black and white or coloured, never both - unlike this book.

As I read on, I was forced to go through the blurb which I evidently hadn't before starting the novel. Basically, there is nothing significant about the story in this book. Not that, it must have, but at the end it almost felt pointless. It seemed like what it is: the First Graphic Novel of India - amateurish and aimless.

It is rather the depiction of a few kooky characters - like, for instance, take Digital Dutta, who appears lives more, dwelling in his mind with Che Guevara, Karl Marx, and various other iconic figures, than outside.

There were also times when it got really tricky to differentiate one character from the other, visually. That is one tricky part the illustrator had to take care before doing a Graphic Novel.

On the whole, it was not such a bad read even. There are bits of the novel where I threw the book away and ROFL'ed. I take the liberty and reveal one such illustration...