No One Writes to the Colonel by Gabriel Garcí­a Márquez 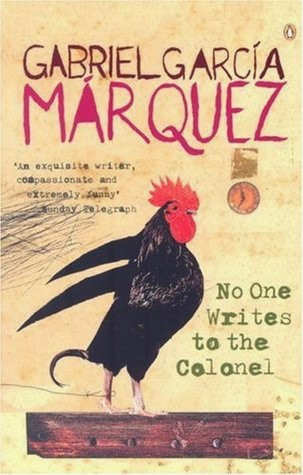 My first ever exposure to the work the Nobel laureate, Gabriel Garcí­a Márquez. I am sure, it is not just me who can't get the the latter part, the part after 'Gabriel', right.

Well, I inform you, reader, beforehand that me reading this book had got nothing to do about the author's recent death. In fact, it might sound bizarre, I completed reading the book that very Thursday - the day the author died. Seriously, I am not lying!

You can't imagine how moved to the core I was when I came to hear the news. Well, I guess, I wouldn't have been so moved if I hadn't read his that very day. When I looking for a read, something off the tbr shelf, some new author to dwell, someone remarkable, Gabriel caught my eye. Then here it is.

It is not essential why I chose this book of all his books. Yeah, I had choice. Perhaps, various options at that. The options even included the author's best work. But I chose this one. Obviously, because of its slender size. This novella was not more than 69-pages!

Blurb (from the jacket):
Fridays are different. Every other day of the week, the Colonel and his ailing wife fight a constant battle against poverty and monotony, scraping together the dregs of their savings for the food and medicine that keeps them alive. But on Fridays the postman comes - and that sets a fleeting wave of hope rushing through the General's ageing heart.

For fifteen years he's watched the mail launch come into harbour, hoping he'll be handed an envelope containing the army pension promised to him all those years ago. Whilst he waits for the cheque, his hopes are pinned on his prize bird and the upcoming cockfighting season. But until then the bird - like the Colonel and his wife - must somehow be fed...

My take on the book:
Being a Nobel laureate and a well-acclaimed author of the seldom writ genre of Magical Realism, I had really high expectations on this novella.

Though I stumbled upon this image of the cover-picture, the cover of the actual novella I owned was not same. This one is more fascinating and full of life than mine. Mine is just a plane photograph of a rooster posing with a part of mud hut on its background.

The pleasantness of the narration follows up from the very start of the novella. The first line, The Colonel took the top off the coffee can and saw that there was only one little spoonful left. An absurd but very apt starting for the novella. The very line depicts the miserable state of the Colonel and his wife. Financially miserable I must say.

The story is basically just that. The Colonel and his wife scrap through the last of their resources and money to live from day to day and wait every Friday for that pension promised by the Government to the war veterans, which never comes.

It is very unlike me to describe the story of a book in my review, but with this novella there is nothing striking about the story. It is the narration and the feel of it that matters. In fact, for me it was just another story. I could read loads of them in the local newspaper. India is brimming with that kind of stories. In various shapes, sizes, backdrops and statures, at that. Basically, don't read this book for the sake of its story.

After writing the review, I re-read it and felt there is something stigmatic about the rating. It kind of gives the wrong impression that the book is uninteresting. It is quite the other way round. The novella was just fine. It was a pleasant read. Nothing can cross that. It is just that I felt that it deserves just the rating I give here.

However, I was misled into reading this novella believing it was a book of the genre, Magical Realism. Well, it is not. It is far from it. Just Realism if you ask me.

Read the novella at your own interest. However, I am pretty certain Indians won't find anything striking about this story. Not to mention, the Colombian village in this story also conducts cockfights, just like in Indian villages. I must also include that I am impressed that it is not only India that is portrayed as poor and decaying.

Title: No One Writes to the Colonel