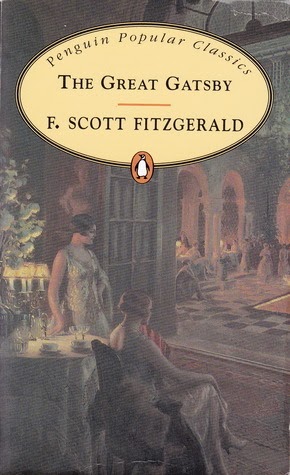 The Great Gatsby. What must I say? What can I say, perhaps? Name a book list featuring top books and you will find this book in it.

Even the author, is considered one of the most celebrated authors of Classic Literature.

Though I had in my possession the '94 edition of the classic, I stalled it for a long time. The blurb and everything else about the book just gave me the impression that it was just another overrated classic. You know, those classic which are overrated only for the fact that they had been written way back in the history. Or portrayed some extinct culture followed by people of that time - like, in the case of this book, the Jazz Age.

Until, the movie starring DiCaprio, titled the same, found its way to the theatre. To watch the movie, I had to read the book first. That was an age-old resolve I had taken during the start of my reading days. So, basically, it is DiCaprio who had made me read this book.

And, in that case, I would love to thank Leonardo immensely for it! Or else, I would have missed so great a book.

Yet amid the throng of guests, starlets and champagne waiters, their host would appear oddly aloof. For there was only one person Jay Gatsby sought to impress. She was Daisy Buchanan: married, elegant, seducing men with a silken charisma and a 'voice full of money'.

As Gatsby pursues shady deals and his doomed obsession with Daisy, F. Scott Fitzgerald distills the essence of the Jazz Age, and probes to the empty heart of the American Dream.

My take on the book:
It goes without saying that I had loved this book very immensely. Hence, the review that follows is a result of my attempt to jot down my fascination about the aspects of the book.

I read the first page of the book and immediately developed a fascination to it. You know, I love books with remarkable starting lines. Though, not the first line, the second sentence caught attention and enthralled me no end,


"Whenever you feel like criticising anyone," he [narrator's father] told me, "just remember that all the people in this world haven't had the advantages that you've had."

What a quote! Very meaningful, but doesn't suit me. Being a critic, myself it is my duty to criticise. That is why people come to us. To get criticised. Well, the word, criticise, is one of the most misinterpreted word, I must say. It gives more of a negative sense, like displaying disapproval. But rather criticise means judging - both negative and positive.

Getting back to the review. Yeah, I liked that line very much. But then the paragraph that followed had left me stumped. It extended till almost the end of the page and save for a couple of sentences, I didn't understand it. The combinations of very complex words had given a tough fight for me. I had to read for about half a dozen times to finally contemplate what is a vague idea of what that paragraph could have meant. I mention this because, after reading that paragraph on the very first page of the book, I let the book be. I decided classics were not my type and gave up the book. It was after two days, when Srinivas really persuaded me in reading the book that I actually started reading it. And I assure you, whoever felt just like me, there is no more complex paragraphs like that in the story that follows. Maybe, there are, but once you get into the flow of the narration, you would put it down only after completing the book. That I am sure.

I was of a misconception that Gatsby is the narrator of the story. But it was Nick Carraway. Well, that did the basic magic. The portrayal of Gatsby was more vivid and fascinating this way with a hint of clandestine aspects.

The introduction of Gatsby was pretty spell-binding. He was not introduced wholly. Each aspect of his aura is made familiar with each scene in the story. A kind of narration, very damn rare these days.

At first, due to the narrator's - Nick's - over-obsessed interest in Gatsby, who was in actual a pretty interesting character, had made me skeptical about the chances that Nick was a gay and loves Gatsby. Well, the blurb said the book was about Jazz Age. I knew little about Jazz Age. All I knew is about Beat Generation, where homosexuals were not a rare. So I considered the possibility of Nick turning out to be a Gay. And worse, Gatsby reciprocating the same feeling. At the end, fortunately, it turned out not to be so.

There were a wide-cast of characters. Pretty impression making and lasting. I loved almost every aspect of the story. But then there is romance. Not relating to Nick, of course. Remember, the book is named after Gatsby. So it was his of-its-kind love story that had kept me spell-bound. There were happenings in the story that were just a matter of chances but were exploited by the characters. I couldn't stop admiring Fitzgerald's infinite skill at story-telling. Seriously, I just got added to the universal fans of Fitzgerald. Just one more new addition.

There were various facts in the book that the author hadn't really made an attempt at describing. He had left them to the reader to mull over and contemplate. Perhaps, not making him lazy. Hats off for that, Mr. Fitzgerald.

Overall, the book was one of the best I had ever read and the more you think about the story that more you will love it, and Gatsby. The title justifies and proves its worth by the end of the story - The Great Gatsby.

Another aspect I liked about the movie is that, it was as exact to the book as it could get. Of course there were few changes in the screenplay, but it same to a large extent, even the conversations, the dialogues, also my favourite first line!