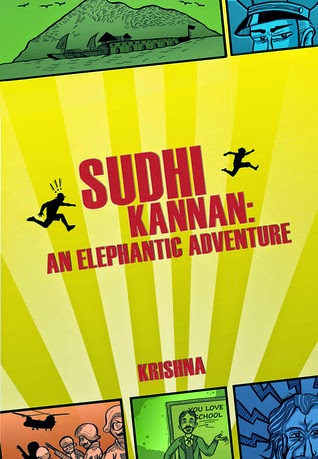 Kannan is a cool dad.

Boss is a mind bending terrorist.

School is hectic. Work is crazy. So Sudhi and Kannan decide to bunk a day off from their routine lives. The trip is to the Elephanta Island located a few kilometers away from the coast of Mumbai. There is a surprise waiting for them in the form of three novice terrorists. As you read this, they are heading towards the island to capture it. It seems possible, since Boss knows a trick or two with hypnosis.

Beware; the Coast Guard will be undercover. Hypnotized soldiers will take over the island. Bullets will rip through the night sky and a ten year old boy is about to change the course of every fool proof plan.

This adventure is going to be a blast. You are invited


About the author (from the book):
Krishna Raj H.K wants to know more about writing.
True, he has done his schooling from The Indian School - Bahrain. He has completed graduation from S.I.E.S - Navi Mumbai and holds a PG diploma from I.I.P.M - Mumbai.

A few years down line, he begins to feel that there are unchartered territories when it comes to communication and word play....or is it just Pink Floyd?

My take on the book:
The very cover design of the book was pretty fascinating for me - the Comic like cover. To top that, the word Adventure in the title held me spellbound the moment I lay my eyes on it. A perfect blend for me. No doubt in that.

The story starts of pretty well. Characterizing Sudhi - the probable protagonist - and Kannan - Sudhi's father, who seems no less a protagonist. And there were other key characters too - like Pooja, and her mother, Megha, etc etc.

Well, I almost liked the short chapters, spanning on an average for five-pages. It was more like a screenplay. This sequence, this setting. And the next chapter: some other sequence and some other setting. And so it goes. A perfect stammering flow that really held my interest. Seriously, I would prefer short chapters to long one with periods. It gives the feel of a fast-reader, which I am apparently not.

As it comes, the author must be surely lauded for such a peculiar venture at the very inception of his career. I mean most of today's author start of with boring romances, or some deep stuff. But writing an adventure story if pretty much my type. Some bragging here: my first novel is an adventure, too. So I take this as a chance to every author out there with even an adventurous story to get their hands on their PCs and write it. God, how badly I want to read adventure novels, just like this one.

The author had done a great job not just sticking with the adventure part and detouring into briefing about the petty fight between Sudhi and Pooja - the ten-year olds - because it just keeps the stiffness out of the story. Helps the reader reflect on their own childhood, making them nostalgic and kid-like, again. On the other hand, the same aspect of the story brakes the pace. Being an adventure story, the pace is something which should always be kept in mind. The pace goes down, there is nothing adventurous about the story. That was the first downer I would like to state.

The second downer is almost a subset of the first one. Apart from the pace, the story was slagging. Too lengthy to be an adventure. I mean, too lengthy with such little content. There was too much unwanted stuff that would make do with a great deal of editing, trimming as they call it. Well, being an aspiring writer myself, I don't blame it on the author for the aspect. No father wants his baby to be trimmed. So it falls entirely upon the editor's shoulder to mold the novel, by deleting the slagging stuff, making it more compact and intriguing.

Also, in this case, I make it an exception about the monotonous narration. It was amateurish, but the plot makes up to it.

Overall, it was fun-packed, but lengthy, thrilling to some extent, kind of a read. If at all you think of reading the book, if you have no problem with the length, you wouldn't regret your choice, I assure you. A leap of faith, in other words.

Looking eagerly forward for the next book in the series, which the anatomy of the title of the book clearly suggests. Sudhi Kannan: ********** Adventure.