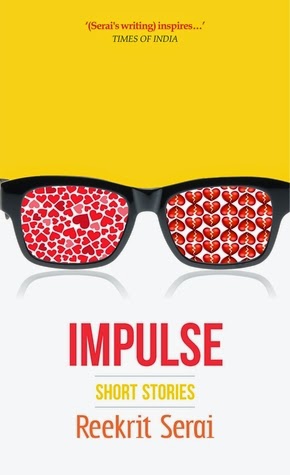 Love is the most common of human affections. Yet, when it comes to love, nothing is as it seems. In modern Delhi, a young man woos a girl from Chandigarh who is totally out of his league, and a college girls life changes dramatically after an encounter with a classmate. In love, people can become objects of infatuation, or means to happiness, such as a partner who's immortalised in her husbands photo album, and two entirely different people who are more than friends, but less than lovers.

In these short stories, Reekrit Serai touches upon subjects that shape our urban lives, such as an entrepreneurs ambition, an interns unconfessed affection for his boss, the realisation of the hardships of being a parent by an impatient son, and the suffering and death caused by communalism.

With humour and subtlety, Serai introduces us to a very new India, where love and happiness go hand-in-hand with hardship and chaos.

Our take on the book:
I must say, the author had got a pretty narrative skill. Especially, with short stories. Through the read I was pretty intrigued that I would have completed it one-go without much effort, if I hadn't had the exams. Well, I say all this without any kind of influence.

I would get to that influence part later in the review.

Even the cover is pretty catchy. White and yellow a pretty eye-catchy combination. The compact size of the book is another physical aspect I pretty much loved. The book has short stories and the book itself is short! The pace was pretty fast, which just added to my liking. Each story in the book took not more than five-minutes for a moderate reader.

That's all the positive aspects. And now, the negatives. I never got personal with any book or an author I reviewed. Well, I never felt the need. While writing this review, as I copy the blurb of the book from GoodReads, I noticed that the book had received 37 ratings, averaging to 4.95 stars out of 5! I was dumbfounded and scrolled to read the reviews. The moment I looked at the reviews two self-contradicting emotions filled my mind that I didn't know whether to laugh or get angry at the whoever planned at doing that. It was so cheap that I HAD to mention it here.

Of course there were few genuine reviews but then majority of the reviews were one-liners, with girls saying something like, "It is just awesome" - 5 stars; "Nice book" - 5 stars; There was this another girl Khawab. She says, "hmmmm me also love to read this book" and no prize for guessing, 5 stars. I must say, whoever did that had made a great effort creating or forging or forcing people at rating the book. Looking into the profiles of those reviewers, I find only one book in their entire profile and that they had been inactive since March - since they had rated the book. Not to mention, they GoodReads profiles were created in February or March. I am filled with utter disgust by now.

Trying not to be influenced by those feats, I try to write this review honestly.

They say, 'First impression is the best impression'. Similarly, the saying plays a important role in an short story collection, too. The first story determines the interest of the reader to read on. Well, the first short story - Twenty-seven - was one of the best I had ever read. It almost moved me to tears. But that was in 2007, when I first came to know that story. I hate to say that the author had copied the very first story in this book.

The below videos depicts the very first story of the book, only that the sparrow was replaced by squirrel and 21 by 27.

That means, the very start had disappointed me. Add to that those fake reviews. However, I read the entire book and rate the book accordingly.

In the end, I want to apologize to the author and the publishers and whomsoever it might have offended. Seriously, I couldn't help it.