The Hotel at the End of the World by Parismita Singh 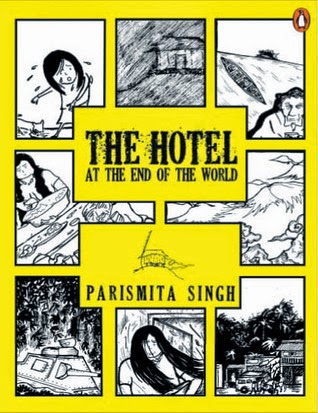 In the hotel at the end of the world it’s business as usual, as Pema dishes up rice and pork curry to travellers who stop by for a drink and refuge from the rains. Everyone there has a story to tell, and at times they end up revealing more than they want to.

On their journey to China, Kona and Kuja, bound together by fate, stumble upon the trail of the Floating Island, promised land of plenty. Pema’s story is about lost love, while her husband speaks of homesick Japanese soldiers in Manipur and the Naga hills during World War II. The Prophet takes us back to the quest for the Floating Island, leading us to the little girl’s story as she sets out to fetch water and chances upon something quite unexpected…

Drawing from various oral storytelling and folklore traditions, and with influences ranging from Commando war comics to World War II history and Buddhist art, Parismita Singh creates a world that's magical yet very real. Exquisite in terms of both narrative and artwork, The Hotel at the End of the World marks a new height in graphic fiction in India. 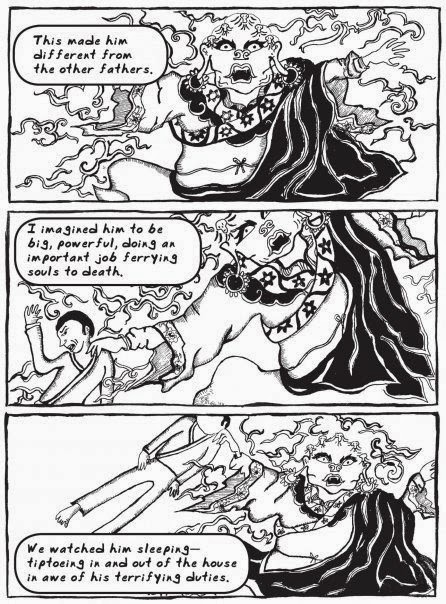 Yet another Shakti Bhatt nominee to our collection. This is first Graphic fiction yet nominated for the prize.

I got this book when I was on a spree for Graphic Novels. Especially, those which were by Indian authors. The research delivered only one result - there were not more than a handful of successful Graphic Novels by Indians out there. Of course, there might be various others, but they seemed to be lost in the sand of time, or maybe, unable to cope up in gaining the limelight. Well, one sole reason for the little fame of the Graphic Novels could be because of their prices. One can seldom find them cheaper than 300 bucks! However, Graphic Novels are just an innovative way of narrating giving the readers a vivider experience and we believe that they need to be tended to equally like any other kind of novel.

For reviews of Graphic Novels, in general, click here...

This Graphic Novel is nothing like I have ever read. It is kind of a short story collection. Like a widely variant cast of characters meet in the hotel, which according to their opinion is situated at the end of the world for all its remoteness and detachment from rest of the civilization, and narrate their side of the story. I say widely-variant because the characters are so distinct and unique that I never come across such interesting character, and I am certain, the peculiarities of the character will get etched into the readers' mind for sometime to come. For me, it would be a memorable of Graphic fictions I have read till now.

About the cover of the book, I felt there is something enthralling about it. From a critic's point of view, I think it is the best cover-design that a Graphic Novel could get for it is enthralling and also doubles up as a sample of the type of illustration inside the book. Though, not the best, the illustrations of the author have a strange ability to have the reader gripped.

However, I felt that the stories seemed to be based in East-India. I don't why, but I had that strange feeling. Even the characters seemed mostly like East-Indians with those small eyes and high cheek-bones. Even the high mountains, lush greenery, the detachment of the geography. Everything prompts that it is based somewhere in East-India.

Coming to the story, I can't explain anything other than the earlier mention aspects and blurb, itself. If I did, I would be giving away too much. However, of all the stories narrated by various characters, I loved Pema's story. It had more folklore, love, fantasy and myth than the entire book combined together. Somehow, I had this special inclination for the story that I felt more connected to it than other stories.

Off the record, this is the first book I had come across till now, that had an almost plain back-cover, save for the ISBN, Barcode and other Publisher-related details. There neither was any blurb nor the praises or acclaims of the novel on the back-cover. Also, this is the first Graphic Novel I've read, that didn't have the author's image near it's intro.

Title: The Hotel at the End of the World