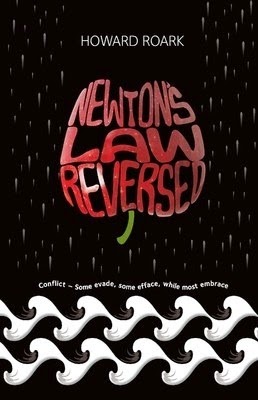 
On a trip to meet an ailing relative in Gangaikondacholapuram, Akash is introduced to conflict when a simple village girl, Ganga trespasses his thoughts. His mind fails to elude Ganga and being overwhelmed by the new found emotion, his attempts to free himself of his battles only grip him tighter. As his mind flits between Ganga and Ganesan, another tormented soul, Akashs only reprieve could have been a banter with his father, when unexpectedly he hears the news of his fathers expiry. Little did he know that his fathers demise and the ensuing trip to the village would alter his cynical view of the world? In this journey from boyhood to manhood, Akash derives profound meaning through his retrospective deliberations on his dead fathers words.

About the author (from GoodReads):
Howard Roark is a graduate engineer who started out working for a multinational as a Network Engineer, a very brief stint, after which he joined a software company to work on products in the Artificial Intelligence / Neural Networks domain and later on in the Finance domain, for about 12 years. And, since 2010, he's been working for Cisco Systems in Chennai, for their products in the Digital Video Broadcasting domain. It's been a career of many a learning, joyous times, moments of achievement, all combined to give him a thoroughly satisfying 15 years of experience.

His interests include psychology, philosophy, spirituality, reading, writing, conversations and of course, Ayn Rand's books. He's a qualified hypnotherapist from the California Hypnosis Institute of India. He restricts himself to offering therapeutic help to his near and dear. And, he currently pursues an M.Sc. in Psychology.

My take on the book:
It is pretty rare to come across so fine a book in the Leadstart Publishers' imprint Frog Books. From the cover of it, I couldn't guess, this book is from Frog Books. I pretty much loved the cover. Look at that, an apple and Newton. They share a very strong bond don't you think? The very linking had prompted me to read it.

The best aspect of the story is the author's narrative style. The protagonist's introspective narrative was pretty intriguing and informative.

And then, the sudden lapsing of time frames was in a way interesting, too. But mostly it was confusing. In this paragraph the author is introspecting, visiting his mother's village, and in the next he is in the past, with his father - who is dead in the present - visiting the same village. There is no declaration. The authors takes liberty in alternating the time frames uninformed. That was for most part confusing and discouraging, as you won't be able to understand the time has changed without much scrutiny.

As introspective the book is, it is also thought-provoking. As the protagonist keeps retreating to his introspective mood, it gives enough fodder for the reader to introspective, themself. With that, the narratives takes a philosophical turn every now and then. So, it needs a little time to get into the book. I had to complete two chapters to get the drift and get along, and into, the book.

Of course, the illustrations. This is another aspect of the book I liked a lot - the illustrations. By illustrations, I don't want you, readers, to build high expectations. They are just crayon - or is it pencil - sketches of a few scenes from the story. As there was no mentions of a illustrators, I guess the author himself drew those sketches. They are much. Just a few, random, even immature, sketches which might not account to very much, but I really loved the author's enthusiasm for it. To say the least, he wasn't that bad, either. Roark - whatever your real name is - you have done a great job. Keep it up...

With that, I want to end this review. Basically, this novel is simultaneously philosophical, thought-provoking and enthralling read...

Update (21-04-2014): I came to learn that the sketches were not by the author, but his friend named, Divya Palaniappan.

Tagline: Conflict - some evade, some efface, while most embrace