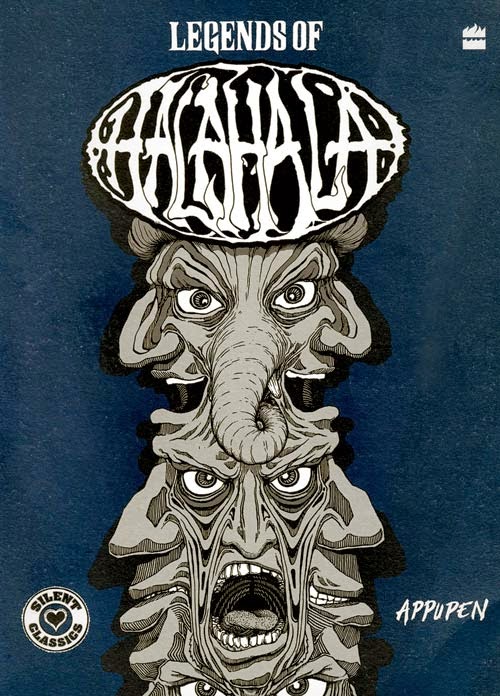 
If you are regular visitor of this blog and read my reviews of other Graphic Novels, you must well aware my obsession about them. Especially, Indian Graphic Novels.

That leaves me with little items on the menu. There are very few illustrators and fewer successful Indian Graphic Novels out there. I mention successful because, if it's not a success, it would either cost you a fortune to buy the novel or you have to go to the end of the world to find it.

I particularly hate Indian readers so much. Their negligence for Graphic Novels is one reason. Of course, they read Comics, but Graphic fictions and Comics share very little of similarities, when it comes to deeper sense. But I shalln't blame them either. The cost of the Graphic Novels are so high, I don't think Indian readers are much to be blamed.

So here I am, trying to promote Indian Graphic Novels and testing my own limits of sanity!!!

Legends of Halahala is a dark, comic ride through a mythical world, and through different periods in its history – from the long-gone Oberian Age to the dystopian era of dome-cities. Appupen's distinctive art and his quirky engagement with worlds real and imagined mark him out as one of the great myth-builders of our time. 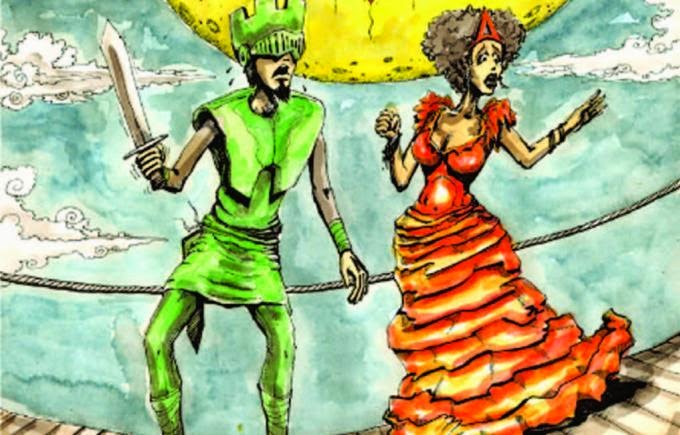 The cover of the book is pretty wild. All those crazy two- or is it three? -faced totems. Strangely, I love it!

If you look closer at the cover design, to the bottom-left corner of it, you will notice a tiny circle with words - Silent Classics. Well, I didn't even notice that thing when I started reading this book. Only after completing the book, after about an hours, I understood the gravity of that, rather, announcement. Though Graphic Novels are more about those colourful illustration, they have these dialogue clouds with dialogues in them and also a few narrative clouds. But this book has neither. There is no narration or exchange. At least, not through words. This book is a narration of stories silently, using only illustrations for the purpose.

Just like the cover design, the stories were mythical, wild and crazy, too.

The book in total consists of five stories,

Stupid's Arrow,
A tale of love between two rival empires portrayed in a very interesting way. The end if pretty humourous, I must say. (The above sample illustration is from this story.)

The Saga of Ghostgirl, Part 2: Legacy,
Though, I didn't understand the latter part of the title, it also took quite some time to understand this tale of payback. Of all the stories, I loved the shady illustrations of this story. It was more like crayon-sketches, but I can't be sure, but it was distinct from all the illustrations of other novels.

Oberian Dysphoria,
Most of the less known Graphic Novels revolve around these kinds of stories: Mythical. This tale is also about love, but love between mythical creatures in a mythical jungle. The end of this story was lovely, too.

16917P's Masterpiece,
One story from my most favourite genre: Dystopian. 16917P is the name of the character who escapes the dystopian dome-society and his intentions were only to leave behind a mark prompting that he was there. In the pursuit he goes to build a masterpiece. At the end, the masterpiece would certainly have a piece of him.

The Accordion Manoeuvre,
Now as I recollect the story, I laugh. It is the author at his absurd 'breast' ... errr, I mean, best. (You would understand the pun, if you read the book).

Overall, the novel is a whimsical, absurd, wild and what-not in a positive. I would have even given the novel 5 stars, if it weren't for the price which is steeper to the higher side. The novel is way too costly for readers, I must agree.