The Common Man Meets The Mantri by R.K. Laxman 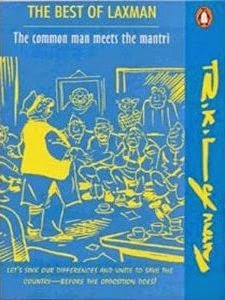 A collection of gems from India's best loved cartoonist. From financial crises to the woes of householders, from political instability to rampant corruption, Laxman's cartoons capture the entire gamut of contemporary Indian experience. Hilarious and thought-provoking at the the same time, this is a treasure house of humour from one of the most striking voices commenting on Indian socio-political life today. This is a revised edition of the 1990 original.

My take on the book:
The first Cartoon book I ever read. And many more to follow.

Yeah, I mistook for the author to be R. K. Narayan. Being a hardcore fan of his, I was at awe at my lack of knowledge that he did cartoons! It was later that I noticed it is not actually R. K. Narayan, but R. K. Laxman.

The cartoons are simply the best. Firstly, I was unsure what cartoon really meant. For me, cartoon were what I used to watch on Cartoon Network channel when I was smaller. But I realised these are the illustrations one comes across in newspapers - I am uncertain whether now a days, but - during the gool 'ol days. A satirical sketches explaining the current political scenarios. Well, the timeless factor these cartoons just prompt that the political backdrop since half century has not changed a bit. Perhaps, it had down-spiraled further.

It hardly took me an hour to savour this 200-pages of a laughter book. Seriously, R. K. Laxman had got a strong nerve for humour.

Series: The Common Man; The Best of Laxman